See portions of this event here. 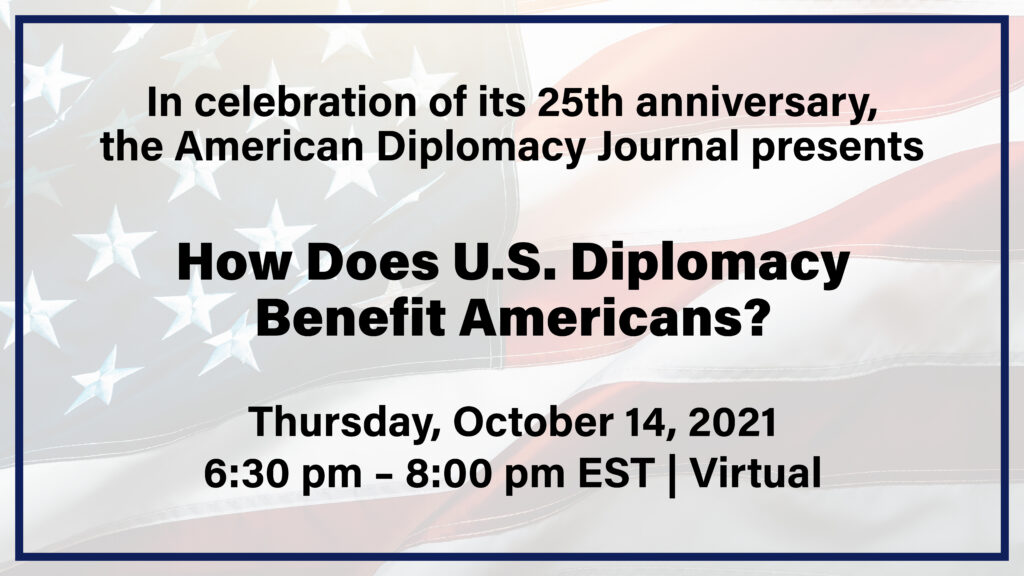 “How Does U.S. Diplomacy Benefit Americans?”

In a challenging time when Americans are asking themselves and their leaders what role our country should play in international affairs and how that role helps the American people, we invite you to join us for a virtual discussion.

Questions may be submitted in advance using this form and during the program using the Q&A function. To provide a fair and objective discussion and avoid duplication, we will choose among the questions submitted.

Hear directly from foreign service officers about diplomacy and their work.

Elected to the United States Senate by the people of Maryland in November 2016, Chris Van Hollen is committed to fighting every day to ensure that our state and our country live up to their full promise of equal rights, equal justice, and equal opportunity.

Barbara J. Stephenson, vice provost for global affairs and chief global officer, joined the University of North Carolina in 2019. She advances Carolina’s global reach, impact and reputation. Previously, she was president of the American Foreign Service Association. During her distinguished 34-year career in the Foreign Service, she was U.S. ambassador to Panama, the first woman chargé d’affaires and deputy ambassador at the U.S. Embassy in London, and dean of the Leadership and Management School at the Foreign Service Institute.

Ambassador Piper Campbell served as the Head of the U.S. Mission to the Association of South East Asian Nations (ASEAN) and Ambassador to Mongolia during a distinguished 30-year diplomatic career.  Her areas of expertise include East Asia and navigating multilateral organizations. She also has taught national security strategy at the graduate level, at the National Defense University’s National War College.

Ambassador Lino Gutiérrez assumed the position of Executive Director in December 2010. His 29-year career in the Department of State included service as Ambassador to Argentina and Nicaragua, Acting Assistant Secretary of State in Western Hemisphere Affairs, and International Affairs Advisor at the National War College. He also served in the Dominican Republic, Portugal, Haiti, France and the Bahamas. After retiring from the Foreign Service in 2006, he served as Senior Advisor to the Secretary of Commerce, adjunct professor at Johns Hopkins University and George Washington University, and Course Chair at the Foreign Service Institute. He is also on the Board of the Institute for the Study of Diplomacy at Georgetown University and serves on the Foreign Service Grievance Board.  His awards include the Department of State’s Distinguished Honor Award and the U.S. Army Award for Civilian Excellence.

Professor Mary Thompson-Jones is a retired foreign service officer and author of To the Secretary: Leaked Embassy Cables and America’s Foreign Policy Disconnect. She is a professor at the U.S. Naval War College. The views in this essay are not necessarily those of the U.S. government. Her diplomatic experience spans a 23-year career as a foreign service officer in leadership roles in the Czech Republic, Canada, Guatemala, Spain, and Washington, D.C.

See the videos during the webinar and after October 14th.

Video I:  Diplomacy’s Many Faces and Facets

Currently at the Foreign Service Institute preparing for a new assignment as the Deputy Political Chief in Kuala Lumpur.

Navarro Moore, Senior Advisor to the Under Secretary of State for Political Affairs

Video III:  Diplomats Working for Americans: challenges around the globe

Yuri Kim, Ambassador to the Republic of Albania

A career member of the U.S. Department of State’s Foreign Service, Branka Bell arrived in Italy in September 2021 as a Transatlantic Diplomatic Fellow at the Italian Ministry of Foreign Affairs. She will join U.S. Embassy Rome as Deputy Counselor for Political-Military Affairs in 2022. Previously, she served in the Office of the Chief Economist, where she advised the Under Secretary for Economic Growth, Energy, and the Environment on key macroeconomic and financial trends at the intersection of economics and foreign policy. Prior to this, Branka oversaw the development and pursuit of U.S. policy objectives with Italy and the Vatican in the Bureau of European and Eurasian Affairs.
Branka has served in the Executive Secretariat’s Operations Center and Embassy Moscow as Special Assistant to the Ambassador. While in Moscow, she was also a political officer specializing in religious freedom, violent extremism in the North Caucasus, and nationalism. She has also served at U.S. embassies in Warsaw and Belgrade.
Before joining the Foreign Service, Branka was Director for Strategic Planning and Fellow on Governance Reform at the Center for Strategic and International Studies (CSIS) in Washington D.C. While at CSIS, Branka served as an expert on institutional reform for the congressionally mandated U.S. Institute of Peace Task Force on the United Nations.
Branka received an M.A. in International Relations from the Johns Hopkins University Paul H. Nitze School of Advanced International Studies (SAIS) and was a Fulbright Scholar at the Universidad Complutense in Madrid, Spain.  She speaks Italian, Spanish, Portuguese, Romanian Polish, Serbian and Russian.

Rebecca Hunter joined the U.S. State Department in 2007 as a Foreign Service Officer.  She has served in Uganda, Albania, Djibouti, Guyana, and in several different domestic roles in Washington, including in the Bureau of African Affairs and the Bureau of Counterterrorism.  Her languages are French, German, Portuguese, and Albanian.  She is currently studying Thai in preparation for an assignment to U.S. Embassy Bangkok.  She holds a BA from Yale University and a diploma from the Diplomatic Academy of Vienna, Austria, where she studied on a Fulbright grant.  She is married to a fellow Foreign Service Officer and has two young children.

Andrew Lentz joined the U.S. Department of State’s Foreign Service in 2003. Over the course of his career he served at our embassies in Damascus (2004-2006), Muscat (2006-2008), Cairo (2011-2015), Kampala (2015-2018), and our consulate in Erbil (2019-2020).   Andrew covered Palestinian economic affairs in the Department’s Office of Israel and Palestinian Affairs (2008-2010) and currently is Office Director for the Bureau of Democracy, Human Rights, and Labor’s Office of Near Eastern Affairs. Prior to joining the Foreign Service, Andrew was a Peace Corps agroforestry volunteer in The Gambia (1994-1996). After returning stateside, he joined a Cleveland, OH-based non-profit organization mobilizing resources of the greater Cleveland’s interfaith community to tackle poverty. Andrew received a Master of Public Policy from Harvard University’s Kennedy School of Government in 2003.

Megan Tetrick is a Foreign Service Officer currently on a congressional fellowship working for Senator Jeanne Shaheen.  Her overseas assignments with the State Department include Ecuador, Pakistan, and Kazakhstan.  Domestically, she has covered Russia policy, created a new women’s economic empowerment program in the Bureau of Educational and Cultural Affairs, and worked closely on assignments and personnel policy issues in the Bureau of Global Talent Management.  She was also a Kathryn W. Davis Public Diplomacy Fellow from 2014-15, a year-long program of academic study and mentoring. Prior to joining the Foreign Service, Megan received her master’s degree from Columbia University’s School of International and Public Affairs. While at Columbia, Megan also completed Russian and Eastern European studies at the Harriman Institute. Megan served as a Peace Corps Volunteer in Ukraine from 2003 to 2006, where she taught English and worked with local NGOs. She received a B.A. in Journalism and Politics from Ithaca College in 2003. Megan is originally from Indiana. She speaks Ukrainian, Russian, and Spanish.