The diplomatic oral histories collected by the Association for Diplomatic Studies and Training (ADST) comprise a unique reservoir of over 2,500 primary source accounts detailing the experiences of American diplomats and how they have conducted business with other nations—how they “got things done.” The stories capture a wealth of insights and reflections not available from official documents alone and contain a treasure trove of raw material for journalists, historians, researchers, and future diplomats. These oral histories provide usable “lessons learned” spanning decades on what worked and what did not.

Since its founding in 1986 as a nongovernmental, nonpartisan, nonprofit organization by retired foreign service officers, the late Charles Stuart Kennedy, the late Victor Wolf Jr., and the late Ambassador Richard B. Parker, ADST has built the world’s largest diplomatic oral history collection. With the support of its staff, membership, and the diplomats who have contributed their stories, ADST strives to achieve its mission of “capturing, preserving, and sharing the experiences of America’s Diplomats”. Charles Stuart Kennedy conducted over half of ADST’s interviews before his passing in January 2022 and was a true visionary in the development of the oral history program. The collection holds personal accounts from ambassadors such as Prudence Bushnell, John D. Negroponte, Harriet Elam-Thomas, Thomas Reeve Pickering, Shirley Temple Black, A. Elizabeth (Beth) Jones, and many other notable figures.

ADST incorporates best practices and new technologies wherever possible in the oral history process. We utilize peer interviewers, many of whom are volunteers, and typically conduct interviews with retired foreign service practitioners who are able to reflect upon their service without concerns of sharing restricted information. The oral history interviews conducted by ADST are lengthy, with the shortest being one to two interview sessions and the longest stretching well past 50 interview sessions averaging one hour each. A standard interview will cover an interviewee’s early life, education, entire foreign service career, and reflections. To further ensure clarity and accuracy in the first-hand accounts, ADST encourages the interviewee to edit the final written transcript. This permits interviewees to fact check themselves, edit out sensitive information, and ensure the spelling of names and locations are correct. Many of the stories told by interviewees go beyond what is in the official record, providing extra context and a personal dimension to diplomatic history.

ADST’s Foreign Affairs Oral History Collection is publicly accessible on its website, adst.org, and that of the Library of Congress. We have completed scores of projects for the United States Agency for International Development (USAID), United States Institute of Peace (USIP), and the Una Chapman Cox Foundation. We also have interviews from United States Information Agency (USIA), labor specialists, the Foreign Agricultural Service (FAS), Foreign Commercial Service (FCS), Foreign Service Nationals (Locally Employed Staff), and spouses in our collection. Our flagship product, foreign affairs oral histories, are highly valued by scholars, researchers, journalists, educators, current diplomatic practitioners, and others, as documented by written testimonials and widespread citation in scholarly works.

Why are Diplomatic Oral Histories Important?

In an era when fact-checking is imperative, oral histories hold their value as primary source material. Capturing personal accounts is one of the oldest forms of historical record keeping and remains a reliable method of collecting and disseminating historical information. The ADST Foreign Affairs Oral Histories cover the work of U.S. Foreign Service practitioners around the world; they also provide valuable insights into different facets of American life, cultural exchange, and major historical events.

Diplomatic oral histories serve to complement the official records. First-person accounts are crucial to researchers and historians. Researchers combine their use of these oral histories with official records, interviews, photos, news articles, and video footage to create a holistic account of important events and an understanding of the people and times in question.

As an historian and commentator who works in international history, I have already benefited greatly from the [ADST] collection. I used it extensively for my book Nixon and Mao: Six Days That Changed the World, and I hope to use it again in my new project on the origins of the Cold War. I have also directed my doctoral students and colleagues to the collection.

In addition to being a resource for scholarly work, ADST’s oral histories are increasingly requested by documentarians, podcasts, and radio shows. We have been able to integrate recordings into some of our own podcast series such as In Their Own Voices and the Cold War Series, which both use oral history excerpts and data. These podcasts, along with Partners in Diplomacy, a series focused on family life in the Foreign Service, and our series on tradecraft, Modern American Diplomacy, are available at adst.org.

In addition, NPR’s Here and Now has used excerpts from ADST’s collection for topics ranging from Nixon at War to an interview with Craig Whitlock, author of The Afghanistan Papers. Also illustrating how oral histories constitute a fantastic resource for media is the use of excerpts from the oral histories of Ambassadors Terence A. Todman and Edward Dudley Jr. in PBS’s special The American Diplomat, which delves into the story of three Black diplomats who broke down racial barriers during the Cold War.

As has been noted, ADST’s practice is to use interview transcripts as the final product. We do, however, maintain original audio records and video records in our archive and release them under special circumstances. Sharing the audio files from interviews with family members of a deceased interviewee is an example of a special request, and a service ADST is honored to provide.

Here is an example of a response we received from one such family member:

[This interview] provides insight into a remarkable person and time in a way that would otherwise be inaccessible to me. And of course it’s also remarkable as a document of the Foreign Service, capturing the perspective of someone who cared and thought deeply about it. To now be able to hear it delivered in her own voice and meter is priceless. Thank you.

Oral histories have boundless uses. Beyond their usefulness to diplomatic practitioners, scholars, media, and family members, these stories can be mined for excerpts for lesson plans, for articles, exhibits, and in books. ADST staff and interns have collaborated with experts, teachers, and educational organizations to develop and disseminate lesson plans that focus on the classroom use of primary sources, predominantly oral histories. These lesson plans cover the Cold War (Fall of Communism in Europe/End of Cold War, The Second Red Scare and McCarthyism), WWII Female Codebreakers, Black Diplomats, Suez Canal, and more. They provide educators with resources beyond the textbook that they are able to tailor for their classroom.

The oral histories that your organization has collected over the years are a national treasure, and I applaud your work to make them even more available to students in the classroom.

Our oral histories also make compelling interactives for museum exhibits. Not only can oral history excerpts work well on exhibit panels, but the audio or video footage from interviews can provide an engaging interactive experience for both online and physical exhibits. ADST has used oral histories to support museums in uncovering relevant material and in our own exhibit, U.S. History of Diplomacy, which is available both digitally and to print along with its companion booklet via our website.

Over the years we have found that oral histories are also a great tool for the interviewees themselves. ADST’s publications program supports retired practitioners in publishing their manuscripts in two series: Diplomats and Diplomacy and Memoirs and Occasional Papers. In addition to scholarly works that reflect the diplomats’ expertise, many authors use their oral histories to help them construct their memoirs or as a foundation for other books. Both the publications produced and the oral histories themselves are useful to active duty Foreign Service officers and prospective candidates, with topics ranging from policy to everyday situations at post and at headquarters.

As a retired Foreign Service Officer and University Professor, I believe that the collective anecdotes and insights constitute an invaluable resource for scholars, practitioners, and the inquiring public… In the late 1980s, while I was serving in Kuwait, I began work on what I thought was to be a pamphlet [of] the unexpectedly rich story of decades of American experience in that country. I began writing, about the time the ADST Collection was initiated, to Foreign Service colleagues posted in Kuwait from the early 1950s when the first consulate was established. Only later did I discover that some of the responses closely paralleled their interviews with the redoutable Stu Kennedy. The resulting book, Strangers When We Met, was based largely on personal histories and private memoirs… Carefully employed, oral accounts lend depth and texture to otherwise dry recitations of official documents and statements. For me, the Foreign Affairs Oral History Collection is a unique and incomparable source for understanding our past and our present.

ADST is proud to be able to continue to grow our oral history collection and capture the story of U.S. diplomacy. We want to encourage you to consider sharing your story with us if you have been involved in foreign affairs, whether with the State Department, USAID, or other agencies, whether foreign service or civil service. Feel free to connect with us by reaching out via email at info@adst.org. 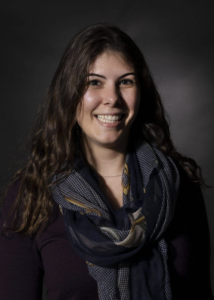 Heather Ashe joined ADST in 2019 as the Oral History Program Manager. Since becoming part of the team, Heather has focused on standardizing and streamlining the oral history process and collection, while promoting the capture of a wide variety of perspectives in our interviews. She has managed grants and projects for ADST with USIP (United States Institute for Peace), Teaching with Primary Sources, USAID, the Una Chapman Cox Foundation and has overseen the recent development of ADST’s educational materials. Heather has a M.A. from George Washington University in Museum Studies, with a focus in collections management and interpretation. She received her B.A. from Skidmore College in History and Art History. She came to ADST with experience in public history and oral history best practices.