The Russian invasion of Ukraine is the most powerful and destructive example in generations of a nation-state attempting to recreate its lost imperial history. This is not a defense of empire. It is Russia’s rejection of nationhood as a legitimate basis for sovereign existence in the world order. That this is being done by a major power with a long history of imperial ambition, expansion, and domination makes it a serious global issue. Putin’s actions are his rejection of the 20th century decline and extinction of empires and a challenge to the international order founded on and by nation-states. 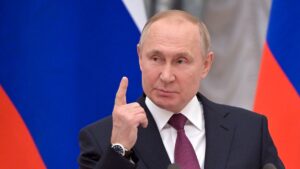 Vladimir Putin is living in the past. He has many vital problems that he is not handling well: the out-of-control pandemic; the burning tundra and taiga; the melting Arctic; the kleptocracy dragging down the economy; the domestic oppression alienating yet another generation; the growing unrest in his hinterlands; the sharply declining population; the uncertain future of fossil fuels; and the undependable Chinese relationship.

Despite these real problems, Putin is focused on muscling Belarus into submission and conquering Ukraine, as if dominating them were truly vital to the Russian Federation. He is a traditional Russian imperialist. The world has changed; Putin has not. He has a KGB mentality and a grudge to settle. While Russia’s political, economic, and social decline steepens, its military grows, thanks to increased funding. Those same priority distortions hollowed out the Soviet empire and contributed to its downfall.

The USSR lost the Cold War because of third-rate technology, over militarization, a weak economic-social base, unreliable satellites that were never allies or partners, and foreign policies that repelled others. In a separate process only partly related to the Cold War, the USSR collapsed from domestic failures due to accumulated internal contradictions of governance, ideology, economics, ethnicity, and empire. The similarities with Putin’s regime cannot be ignored. Yet, Putin blames the West for the fall of the USSR, calling it the “greatest catastrophe of the 20th century.” Putin is on the same imperialist course as the Tsars and Soviets.

The West, however, must deal with Putin as he is. He has legitimate complaints about short-sighted Western policies. For years the U.S. has devalued diplomacy out of ignorance and hubris, which undermines national security and NATO. NATO and EU expansions were good ideas, but were uncoordinated, and poorly developed and executed. Abandoning most arms control, which benefited American-Russian mutual security, was a major mistake, leaving our European allies to face Putin’s missile threats. None of those, however, justifies Putin’s war in Ukraine. Putin’s unilateral, military threats fundamentally challenges the post-Cold War order, not just in Ukraine.
The West’s biggest mistake, however, was failure to maintain a credible NATO deterrent posture in Europe. European nations allowed their military capabilities to deteriorate; some became impotent. The Alliance was blind and unresponsive to leadership and policy changes in Moscow over two decades. Putin is not Gorbachev or Yeltsin; yet NATO acted as though he were. NATO ignored U.S. urgings to strengthen itself, and the warnings of its East Central European members even after the 2014 annexation of Crimea and take-over of part of the Donbas. These errors make NATO partly responsible for the invasion of Ukraine – a sin of omission. The immediate reaction of NATO to the invasion is a plus, provided it is a first step of a new era in European security thinking and NATO policies.
East Central Europe in Turmoil

East Central Europe (ECE) designates the countries between Western Europe and Russia. It is an area of diverse, well-rooted cultures (i.e. ethnicities, religions, languages, customs, histories, hero-myths, art, literatures, and aspirations). It has historically shifting political structures buffeted by the power of empires. In the modern period, seven empires competed for control. The 20th century was the graveyard of empires. By its end those seven, and others, had disappeared. The last one to die, the USSR, is the one Putin seeks to revive.

Historians have long defined ECE peoples as “nationalities” even when they are not “states.” When empires ruled, nationalities did not disappear or lose self-consciousness. Nationalities still contribute to the region’s political instability. Some empires contracted into nation-states (e.g. Sweden, Poland, Lithuania). After 1919, nation-states supplanted empires as sovereign rulers – the Wilsonian transformation. Putin deliberately distorts history by saying Ukraine was an artificial state, never a nation. It has long been a nation, but only recently a state.

He wishes to resurrect the last of those empires, reversing the “catastrophe”. That endangers vital national interests of ECE nations. The ECE and Europe are in grave danger if they accept changes of agreed European borders by military aggression. Whatever complaints Putin may have about the post-Cold War borders, they were neither arbitrary nor created by force. The borders of the former Soviet Union (FSU) conform to those of the USSR republics. They were recognized and accepted by Russia, inter alia, in the Belovezh and Alma Ata Accords in 1991, and other agreements. Moreover, in the Budapest Memorandum of 1994, Russia guaranteed Ukraine’s boarders and independence in return for Ukraine becoming a non-nuclear weapon state.

Putin is a classic Russian Slavophile. His goal is to increase Russian security by pushing Russian borders outward. Ukraine is just his first step. That he not succeed is critical to NATO and the Atlantic Community.

The Challenge to the Global “Enterprise”

For the last century, the West, led by the United States, built, not an “Empire,” but an “Enterprise.” Empires have one capital in one “mother country,” where sovereignty resides. In contrast, the new enterprise created after World War II is a system whose global operations foster international power centers distributed among independent nations. U.S. interests require it to support what it built with European and other regional assistance. Abandoning it will lead to the end of the enterprise and its rule-based order and open the way for a return to empires – Putin’s objective. The Atlantic Community in the 20th century was a foundation stone of contemporary international order, as the U.S. led it out of “realpolitik” into “American realism.” The new order, grounded in international institutions, embraces multiple national interests and sovereignties. This new, flexible approach firmly rejects empire and imperial controls in favor of an enterprise of countervailing power in a liberal, rule-based order, anchored by international institutions.

Putin may not realize that the international community fears empire and favors this enterprise, where sovereign nations take part in and benefit from multiple institutions dedicated to agreed projects of the enterprise. Each institution requires its members to have at least minimal commitments to that institution’s goals. Most participants are, like Russia and China, dictatorships and oligarchies; a minority are Western and non-Western democracies. Nonetheless, each, to varying degrees, can influence the enterprise, which is loosely held together by rule-based institutions. No member has control of the enterprise or its institutions. Apart from playing by the rules, the enterprise demands no loyalty or submission. And members give neither. Russia and China participate in and benefit from this enterprise while retaining sovereignty, independence, and power, as do all others.

China is more astute than Russia, despite strong, deep traditions of Empire. Like Russia, its imperial claims (e.g. Tibet, the South China Sea) have not disappeared. But China has been less impetuous that Putin. Under Deng Xiaoping, China was ambivalent about the enterprise, citing China’s weakness as the reason.  His successors remain skeptical, but they participate. They want rule changes that give China a leading role – if possible, the lead role. That is a long-term matter that needs to be sorted out. It will be complicated but can be done without resorting to armed conflict.

Putin should get fully on board the enterprise. Unfortunately rigid nationalism, fear of losing power, and Russian history, traditions, and culture cause him to embrace empire. That is a strategic mistake.

Ambassador McNamara is Adjunct Professor at GWU’s Elliott School of International Affairs. A career diplomat, he served as a deputy to the Director of National Intelligence; Assistant Secretary of State; Special Assistant to the President; Ambassador to Colombia; Ambassador-at-Large for Counterterrorism; and other senior positions.