Home / Commentary / Democracy in Africa is Like a Flashlight without Batteries

Promoting democracy has been a central pillar of U.S. foreign policy for decades. This has been true for the dozen U.S. missions in which I have served in Africa over the past half century. Unfortunately, my experiences have left me doubtful about the results achieved by the hundreds of millions of dollars the U.S. has invested to promote democracy in Africa.

The overriding concern of the chief and his representative council of elders was to maintain a peaceful and stable environment, acknowledging that no progress could be achieved without stability. As central government influence increased, local leaders offered their support in return for new schools, water wells and health clinics. The goal of this tribute system of “patronage governance” was not democracy but justice, a concept embedded in the local culture while “democracy” was an imported notion.

Presidential elections were held in Togo in 1972. There was only one candidate, the incumbent president. The chief in my village had received instructions from the capital that every adult in the village had to vote. You could either vote yes or no. The “yes” voters had to go to the boys’ school and have their thumbs dipped into blue indelible ink. Those who dared to vote “no” cast their votes at the girls’ school and their thumbs were dipped in red indelible ink. Stories abounded about how the few who voted “no” were beaten by ruffians hired by Togo’s only political party.

I agreed with many Africans that involving yourself in local politics was folly. Yet, much wealth was accumulated by those who rose to the top of the political pyramid. Sometimes it was a family affair. I played tennis with a former minister of rural development. He had only served for eight months. When I expressed sympathy for his short tour as a minister. He replied, “That’s okay. Eight months was enough.”

Later I learned that eight months was enough to enrich himself. Culturally, stealing from another person was abhorred but stealing from the government was all right. When I was in Niger with the U.S. Agency for International Development (USAID) in the late 1970s, I had to constantly interrupt people when they referred to their project as the “gwamnati’s” — the government’s. I tried to disabuse them of this notion. I repeated this was their project. I knew if they believed it was the government’s project they would be more likely to rip it off.

In Togo, the president who was re-elected in 1972 occupied his office for a total of 38 years until his death in 2005. One of his many sons became his successor and continues today as president. Yet little or no outside pressure has been exerted to end this familial dynastic form of governance. I have always wondered why the U.S. government maintains supportive relationships with such countries.

Years later I worked for USAID in Niger. One of my first tasks was to appraise Niger’s nascent democratic processes. I was told by a local man that he liked democracy because with $10,000 he could win a seat in the national parliament and use his legislative position to obtain profitable government contracts. No matter that he was unschooled and did not speak Niger’s official language, French.

The Niger government decided to do as a number of West African countries had done and institute the election of local officials. This act was referred to as “decentralization.” I visited a number of elected mayors. Their major complaint was they did not have capital to do anything. The impoverished condition of their communities excluded taxation to generate revenue for their operations.

Traditional chiefs received allowances from the central government, which also maintained local administrative offices. These offices were often in competition with the newer decentralized units. Neither the traditional chiefs nor the new units were held accountable to the public. The decentralized units that received funding from the central government were as likely as the traditional ones to squander the money, thus decentralizing corruption.

During a visit with a decentralized governing group in northern Niger where the Tuareg ethnic group held sway, I was startled when an elderly woman stood up and loudly addressed our meeting. Her main point was that they liked voting for the candidates running for local governance positions, but that decentralization was like being given a new flashlight without any money for its batteries. Her words made me wonder if Africa could afford the kind of decentralized democracy being promoted by the U.S.

In the 1980s, I worked in Guinea, a country rich with natural resources. At that time, Guinea’s long-term dictator unexpectedly died. I believed his death would open the way for democracy and the exploitation of the country’s vast mineral wealth for the benefit of the Guinean people. This did not happen. Guinea was to be subjected to more strong-arm leaders. It remains among the poorest countries in Africa.

Guinea did teach me some lessons. One was that cultural and social values in Africa are enduring. Most people do not possess an allegiance to a nation but are prepared to demonstrate faithful loyalty to an authoritarian leader.

In 2007, I visited the Imam of Maradi, Niger to solicit his insights. He listened intently to my queries and politely dismissed them as being unimportant. In Hausa, he emphatically said that the three main problems affecting Niger were “jahilci, talauci and yunwar” (ignorance, poverty and hunger). His words made me think that democracy was not possible until most of the population was educated.

I concluded that the practice of democracy in a traditional agrarian society was not possible as long as the majority of the population had not been to school. Wealthy politicians can easily manipulate an uneducated population. And the connivances of corrupt politicians and rich businesspeople turn democracy on its head, making it a sham exercise.

For example, most of Ghana’s people have been to school and that makes a difference. Perhaps the Ghanaian democratic model, with its high level of participation and its nonviolent close national elections of well-educated candidates, is a good one for African countries to emulate.

As one form of democracy does not fit all countries, perhaps there is some room, depending upon the nature of a country and its ethnic makeup, for the development of an indigenous democracy that incorporates local cultural and social values. The fact that most Africans vote along ethnic lines prevents the adoption of a western-style democracy.

New factors make governing in Africa even more complex. Today there are more people to govern and most of them can communicate via internet and mobile phones. Africans are also more mobile than they were a couple of decades ago. The popular insurrection that I observed in Ouagadougou in 2014 would not have been possible 25 years earlier. The widespread use of motorbikes and cellphones permitted protesters to move about and communicate. Of course, the same technological advances apply to the violent extremists who threaten a number of African countries.

Another factor is the adopted democratic ideas of the growing African diaspora and the billions of dollars they remit annually. In addition, over the past two years the COVID-19 pandemic has dampened all activity in Africa. With less than fifteen percent of the African population fully vaccinated, the pandemic has become a reason to postpone elections and close civic spaces.

Any form of democracy involves popular participation and that means it is a time-consuming process. Democracy works well when the majority of the population is well informed with truthful information. It also helps to be knowledgeable of the power dynamics at work. All this becomes more complex with the growing spread of false information. Definitely the truth has become more difficult to determine.

There are many talented young Africans who are involved with politics, but they do not have the wealth and organization of ruling parties. Sometimes these young politicians are coopted into mainstream political parties and lose their independence. I have been waiting 50 years for young technocrats to lead African countries on the path of genuine democracy. I am still waiting.

There are a handful of African countries where liberation movements became the main ruling political parties. Because these parties are invariably anti-democratic, I believe promoting democracy in such countries is futile. Other political parties, some of which are more committed to democratic values, cannot compete with such dominant pre- and post-independence liberation movements.

If history is made in the cities, Africa is in trouble because its urban areas are doubling in size about every ten years. Much of this rapid urbanization involves the expansion of slums. A central question may be how the urban “youth bulge” will vote in the future.

I was a U.S. observer for presidential elections in Benin in 1990 and Tanzania in 1995. In both elections, I was threatened by violence. These incidents made me think that democracy was not worth the cost and violence it generated. A Zanzibari suggested to me that the money spent on elections would be better invested in constructing schools and health clinics.

What do elections cost in Africa and who pays for their organization? One could also ask what well-run elections have achieved in Africa. Who do elections benefit? And what was the level of participation? For me, as most countries in Africa have been mired in the lowest human development category for decades, democracy is only good to the extent it reduces poverty.

Without major improvements in education and health indicators, most African countries will remain in this low category. External donor agencies need to keep this in mind as they plan their assistance. Poverty reduction should be the focus of host governments and donors alike. It is difficult to see where the promotion of democracy fits into any poverty reduction strategy.

The lack of accountable and effective institutions in most African countries renders even the best of elections null. There are not the institutions needed to ensure the freedoms and rights of the people. Moreover weak institutions undermine confidence in the best elected leaders.

To make matters more difficult, recent democratic inconsistencies make it difficult to hold up for emulation the U.S. model of democracy. Setbacks in U.S. democracy are also setbacks for a U.S. policy that promotes democracy abroad. In addition, current tragic events in Ukraine remind me of the Cold War period when a vote favorable to the U.S. in the UN trumped any democratic leanings of a host government.

Rather than spending money on democracy promotion programs that have made a little difference in Africa, the U.S should give top priority to helping address basic human needs, notably in the areas of education and health. In the final analysis, we may have to acknowledge that our version of democracy is not the governance system Africans are looking for to give them justice. 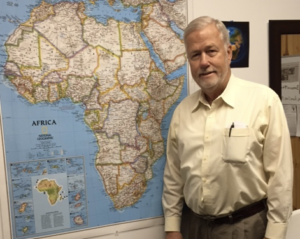 Mark Wentling retired in 1996 from the Senior Foreign Service after serving as USAID’s principal officer in six African countries. His 50 years in Africa includes work with the Peace Corps, nongovernmental organizations, and as a contract employee for USAID. He has published eight books, including African Trilogy and his three-volume Africa Memoir, which covers all 54 Africa countries, as well as numerous professional articles. Currently, he has a ninth book, Kansas Kaleidoscope, pending publication and is working on a tenth book, Jackleg Boys.