Home / Eyewitness / William Rockhill, The Man Who Shaped China Policy a Century Ago

Linguist, author, explorer, and diplomat, William Woodville Rockhill is best known as the author of the Open Door policy toward China put forth by the United States in 1899. In between his first diplomatic assignment in China and his later role as the top U.S. diplomat there, he trekked for months across North Asia, and recorded meticulous observations of climate, geography, and local people in a book published in 1894 by the Smithsonian Institution.

In his two decades of service to the United States, Rockhill served both in Washington and as the American envoy to several major countries. He was, however, not just a diplomat. He lived a life uniquely diverse for an American of his or any day.

When a boy, he moved with his widowed mother to France. In his teens he entered St. Cyr, the French military academy, where he found time to study Tibetan, the first American to do so. After St. Cyr he became an officer of the French Foreign Legion, and served in Algeria, where the French administration was taking stern measures to control the native Muslim majority.

In 1876, in his early twenties, Rockhill left the Legion, returned to America, and married his childhood sweetheart, Caroline Tyson, the daughter of a prominent Philadelphia lawyer and former assistant postmaster general. The couple bought a ranch in New Mexico, but soon sold it and moved five thousand miles east to Montreux, Switzerland, where Rockhill’s mother lived. Throughout these moves, his interest in Asia continued and, it seems, increased. Enjoying a private income, he studied Tibetan, Sanskrit, Chinese, and Salar (a minor Turkic language of Xinjiang), and co-authored a biography of the Buddha.

Decades would pass before the creation of a career American Foreign Service, but Rockhill was perhaps uniquely qualified for a diplomatic job, especially one in Asia. Although he had not yet traveled in Asia, he had studied the region and several of its languages, he was an experienced traveler, and he had connections in Washington. He applied for a diplomatic post, and in 1883 was assigned as a junior officer to the American Legation in Peking.

After several years at the legation, Rockhill asked his chief, Minister Charles Denby, for an eight-month leave of absence without pay, in order to travel through western China to Tibet. Denby turned him down, saying it was too long to leave his job. Rockhill wrote that Denby added, perhaps with a smile, that he frankly didn’t know where Tibet was, but, “…since you are so anxious to see Tibet, I will use all my influence at Washington to have you appointed minister resident and consul-general there.” Rockhill, perhaps smiling in turn, said he’d best resign and travel on his own.

No longer a diplomat, Rockhill finished his preparations in 1888 and began the long journey that would take him into both Mongolia and Tibet. He wrote later that he was not sure just what route he would take through Tibet, but certainly it would be unexplored territory “…and could not fail to prove interesting.” Separately he wrote that Tibet had become his “life hobby.” He hoped to reach Lhasa, Tibet’s administrative and religious capital, seldom visited by Westerners.

Rockhill went well prepared. He took with him several servants, mules to carry baggage and a pony for him to ride, and as well as two Winchester carbines, a shotgun, and a revolver, sixty pounds of silver and twenty ounces of gold hidden in his garments—he dressed as a Chinese man—and various other items, some intended to be given as presents to influential persons.

In ensuing months Rockhill traveled, as he recorded, 4,700 miles, much of it in extreme weather and camping once at over 16,000 feet. He returned safely to Peking and then undertook a second long trek to Tibet from which he also returned safely.  He had hoped to visit Lhasa but the local authorities would not permit him to do so.

Rockhill’s meticulous observations of climate, geography, and local people resulted in two books on his two treks. The second, published by the Smithsonian Institution in 1894, established him as one of the great American travelers.

His wife complained that he made light of the hardships she knew he had encountered during their long separations. In fact, he records not only stays in filthy village huts but treks across “splendid pastures” and fine forests with lovely flowers underfoot, as well as detailed notes on the people he encountered and their languages and ways of life. He was aware that such detail might prove tedious to the reader but, he wrote, he wanted to give a good feel for the country he traversed.

Rockhill was now famous as an explorer, on both sides of the Atlantic, and was awarded the Gold Patron’s Medal of the Royal Geographical Society. It was time to turn from treks back to diplomacy. From 1894 to 1897 he served in Washington, first as number three in the State Department and then as Assistant Secretary of State, the number two. In 1897 President William McKinley made him the American envoy to Greece, Serbia, and Romania, resident in Athens. He spent just two years at Athens, and would go on to serve in a succession of top posts at home and abroad and became arguably America’s ablest envoy.

Rockhill is best known not for his treks across China and Tibet, or for his years as a chief of mission, but for the Open Door policy toward China. By the end of the 19th century, China was a large but feeble empire; its breakup seemed not unlikely as advanced countries competed for spheres of interest there. While poor, the country was a huge potential market. The British had attacked and defeated China in two Opium Wars that granted Britain preferential trade rights, made Hong Kong a British colony, and ensured the continuation of large-scale British sales of opium.

Other major powers—Japan, the Europeans, and the United States—did not want to see British hegemony in China. Rockhill prepared diplomatic notes that U.S. Secretary of State John Hay sent to other great powers in September 1899, proposing what was soon called an Open Door in China. The immediate catalyst was another great power encroaching in China: Germany had leased the port of Kiao-chao and adjacent territory. (Kiao-chao is today Qingdao, a major port and commercial center, population nine million.)

According to the State Department Office of the Historian, “…Fearful that the long-standing free trade system in China would be compromised and that a weakening China might be carved up like Africa had been, Hay acted to defend U.S. interests in the area. The Notes aimed to preserve both the existing system of trade, with equal opportunity for all foreign powers, and to maintain China’s territorial integrity so that no foreign power would have an advantage. This was the first clear and official statement of U.S. China policy…”

None of the powers objected to Hay’s notes in so many words, but Russia in particular responded with many caveats which, says the Historian’s office, practically negated the notes’ central principles.

In 1899, China was beset by the anti-foreign Boxer Rebellion, named for the martial art practitioners who killed hundreds of European missionaries and many thousands of Chinese. Beyond the carnage, many feared that foreign powers might use the rebellion as an excuse to carve the country into colonies—colonies far larger than Hong Kong.

In June 1900 a large force of Boxers, with approval of the Dowager Empress Cixi, attacked the two-square-mile Legation Quarter of Peking that was occupied by eleven foreign missions, including the American legation headed by Minister Edwin Conger. Rockhill was in Washington, working on China together with Alvey Augustus Adee, the longtime number-three in the Department of State. Information was lacking; telegraphic links with the legations were cut. The United States and allied nations decided to use force. The siege of the legations was finally broken on August 14 by an army of 18,000 men from eight nations, including 2,500 American soldiers and Marines.

In July, after the siege had begun in Pekiing, Rockhill was named Special Commissioner for China and left hurriedly for Shanghai. When he arrived there, Conger was still in the besieged capital. The chain of command was complicated by the ill health of Secretary Hay, who had retreated to his country house in New Hampshire. The number two in the department, David Hill, had also gone out of town, leaving Alvey Adee the de facto head of the Department.

Once the siege was raised, Adee cabled Conger that he should “confer fully” with Rockhill and they should make joint recommendations for action. The two seem to have gotten on together, and Conger stayed on at Peking for five more years—when he was replaced as minister by Rockhill.

A main question after the siege was lifted was what retaliatory action the allies should take. Although Kaiser Wilhelm of Germany was dissuaded from trying a number of Chinese as war criminals, the allies demanded reparations from China. Rockhill argued successfully for moderating the demands; in the end it was agreed that China should pay $330 million, almost $10 billion today. Rockhill was also successful in proposing that the American share be used to fund student exchanges between China and the U.S. This Boxer Indemnity Scholarship Program brought over a thousand Chinese students to the U.S. between 1909 and 1929, and helped fund the precursor to today’s Tsinghua University and a number of other educational institutions.

Rockhill stayed on in Washington from 1899 to 1905, working not on Asian affairs but as Director General of the International Union of American Republics. In 1905 he became the American envoy to Çhina.

In Peking he maintained his lifelong interest in Tibet. The British had sent an expedition to Tibet in 1904, and subsequently the Qing dynasty claimed Chinese sovereignty there. The 13th Dalai Lama, Thubten Gyatso, fled to Mount Wutai, a sacred Buddhist site 300 kilometers from Peking. In June 1908, Rockhill made a five-day trek on foot to Mount Wutai to meet the Dalai Lama, whom he convinced to seek peace with China and Britain. (In the event, the Lama returned to Tibet and declared independence in 1913; but there was continuing strife with China and full independence was never achieved.)

In 1909, President William Howard Taft made Rockhill the ambassador to Russia, where he served until 1911, when he became ambassador to Turkey. At the end of 1913 he ended his long service to the United States, and in 1914 he was named advisor to the Chinese republic that had replaced the imperial regime in 1912.

In late November 1914, Rockhilll sailed for China from San Francisco. He had come down with a cold; it turned into a lung infection. He was hospitalized at Honolulu, but the man who had weathered difficult treks in Asia died at sixty in Hawaii. It was a remarkable life. 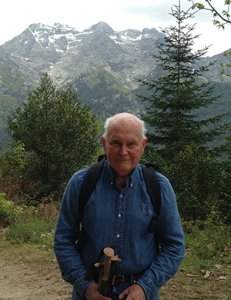