With calls for greater racial and ethnic diversity within the State Department, a new partnership promises to open a little wider the talent pipeline for minorities leading to diplomatic careers.

In early September, the Washington-based DACOR organization and the University of the District of Columbia (UDC) signed a mentoring partnership aimed at expanding the flow of women and minorities to diplomatic careers in the U.S. Foreign and Civil Service.

The agreement between DACOR, an organization of foreign affairs professionals, and UDC, one of 51 public historically Black colleges and universities, comes at a time of increased attention by the Biden administration, Congress, and foreign affairs organizations to achieving a more diverse and inclusive State Department workforce.

In its November 2020 report, “A U.S. Diplomatic Service for the 21st Century,” Harvard’s Belfer Center concluded that “efforts to promote greater racial and ethnic diversity have failed.” Authored by Ambassadors Nicholas Burns, Marc Grossman, and Marcie Ries, the report called for a “relentless focus on diversity as a first-order strategic policy,” adding that “diversity is an essential element of producing high performance” and that “America’s diplomats should be representative of the American people, their values and their aspirations.”

Similar sentiments were expressed in “Diplomacy in Crisis,” a report issued in July 2020 by the Democratic staff of the Senate Foreign Relations Committee. That report called for increased diversity throughout the Department of State. The report found that “diversity, equity and inclusion at the Department is lacking” and recommended Congress immediately pass the Department of State Inclusivity Act (S-3430) to enhance diverse representation of all kinds at all levels of the State Department.” The bill was introduced in March 2020 and action on it is pending.

While acknowledging that the recently expanded Pickering, Rangel, and Payne fellowship programs “provide a vital channel for young people from underrepresented communities,” the Belfer report called for a “far greater focus on recruitment of minority diplomats. Recruitment must begin at the high school and college levels.” The report further recommended that the State Department “expand the number of minority diplomats who speak at both high schools and colleges, including historically Black colleges and universities… to familiarize students with the Foreign Service as a career.”

In its pilot year, the mentoring program will match 12 undergraduates enrolled in UDC’s global studies courses with experienced diplomats and other international affairs professionals. Nine of the 12-member DACOR mentoring team are men and women of color.

The partnership with UDC builds on DACOR’s experience mentoring students in the Elliott School of International Affairs at George Washington University. The GWU program, now in its third year, pairs graduate students in Asia Studies, Latin America and Hemispheric Studies, and International Development Studies programs one-on-one with DACOR mentors with experience in those regions of the world. That program currently operates with 60 one-on-one student-mentor pairings.

“The success of this venture with UDC will ultimately depend on the strength of the relationships built over the coming years between DACOR mentors and the participating students,” said DACOR President James Dandridge II. “It is our hope and expectation that this new undergraduate mentoring partnership will expand the diversity of young people entering the talent pipeline leading to fulfilling and spectacular careers in the State Department and other U.S. government agencies operating internationally.”

For UDC, the agreement is the first formal mentoring program open to undergraduates at the 170-year-old institution. Established by abolitionist Myrtilla Miner in 1851, the university offers associate’s, bachelor’s, master’s, and doctoral degrees and a host of workplace development services and programs.

“As an institution, if we do our job, our students will be ready, willing and able to go out and make the world a better place,” said University President Ronald Mason, Jr. “Part of doing that job is providing students with opportunities to directly work with and learn from professionals in their aspirational fields. That’s why this partnership with DACOR is an important one. We’re honored to pair our global studies students with accomplished foreign affairs professionals and diplomats who can share their experience and the nuances of the profession with our students. With their guidance, our students can grow their own unique talents and diversify the foreign service profession.” 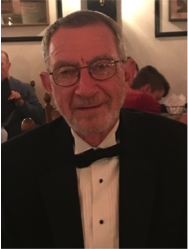 Tom Brannan is Chair of the Public Outreach Committee, DACOR