Home / Books / From Sheikhs to Sultanism 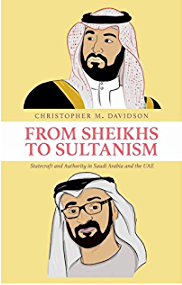 From Sheikhs to Sultanism: Statecraft and Authority in Saudi Arabia and the UAE

Christopher M. Davidson, a prolific author, wrote a book in 2015 titled After the Sheikhs: The Coming Collapse of the Gulf Monarchies, in which he divined the future demise of the Gulf sheikhdoms within five years. Six years on and that prophecy has not panned out. On the contrary, the Gulf States look much stronger and persistent than when he made his prediction. By his own reckoning, Saudi Arabia and the UAE “now indisputably serve as major components of the global economy and are increasingly influential members of international organizations. There is an urgent need to recognize that major ruptures in the structural logic of their regimes could well end up having a direct impact—for better or worse—on policies, economies, and individual livelihoods all around the world.” The newly acquired status by the two states is the subject of his 2021 book, From Sheikhs to Sultanism: Statecraft and Authority in Saudi Arabia and the UAE.

Davidson argues that “notwithstanding formal continuities there appear to have been recent and possibly interconnected shifts deep inside the political systems of these two states”, i.e., Saudi Arabia and the UAE. The political change the author discerns is one of high personalistic and arbitrary rule. An exhausting effort at reaching a nuanced concept notwithstanding, the author lands on an “ultra-autocratic, twenty-first century strain of ‘sultanism,’ a concept that “may have emerged (or be in the process of emerging) in Saudi Arabia and the UAE.”

Modern economy and bureaucracy make it nearly impossible to have a pure form of sultanism. States are becoming more and more complex, and the administration they spawn have become too large for a single master to control. It is possible that Arab Gulf states are undergoing transformations different from what Davidson is proposing. Rationalization and bureaucratization are continuing unabated. To say rulers rule is redundant—and one does not need to write a 500-page book to know that much. However, what needs more attention is that rulers do not rule alone. They rule through what Gaetano Mosca called the “second stratum”. The second stratum is larger than the upper stratum and without which the rulers cannot rule. Political organizations need the second stratum but so do other types of social organization “in order to be possible,” according to Mustafa Delican. Moreover, serious deviation from traditional rule-based conduct has the potential of mobilizing contenders within the family to dislodge aberrant behavior. Sultanism, hence, runs against the grain of the system.

How does Davidson substantiate his claim that the new rulers of KSA and UAE “have effectively supplanted the ‘sheikhly rule’ (or consultative neo-patrimonialism) of their predecessors with something more autocratic, more personalistic, and perhaps even analytically distinct?” He sets up three criteria: First, come up with a scientific and current definition of the central concept of sultanism. Second, find a detailed and comprehensive analysis of the ‘route to power’ of the new rulers. Third, explore the new rulers’ mode of rule, and how it is different from that of their predecessors.

To undertake such tasks, the author devised methodologies to gather data by surveying a number of residents in the target countries. A number of interviews with UAE and Saudi citizens who are or were working for their respective governments were conducted. In addition, a “total of fifty-three other citizen stakeholders were interviewed, including private sector businesspeople, academics, and activists.”

Before examining the cases Davidson attempts to reach an analytic and distinct concept of sultanism. He cites a plethora of scholarly works to show the validity of sultanism in a multitude of political and geographic regions, from sub-Saharan Africa to the Middle East to Latin America down to Southeast Asia and back to Central Asia. The concept, admittedly, has become rich empirically, but alas, poor analytically. If sultanism is everything then it explains nothing. Furthermore, the historicity of the concept of sultanism is open to debate. Merwin Crawford Young argues (cited by Davidson) “the Ottoman caliphate was actually ‘a highly sophisticated construct, with its separate palace, military, scribal, and religious hierarchies…to reduce the entire system to mere unbounded personal rule is seriously misleading.” Bernard Lewis, a dyed-in-the-wool orientalist, commenting on “the pattern of autocratic and despotic rule currently embedded” in the Middle East said, “Such rule is alien, with no roots in either the classical Arab or the Islamic past.” It is safe to say, the concept of sultanism is a Weberian construct with no historical reality.
Turning to the second task of substantiating the rise of sultanism as the route to power by the de facto rulers of the KSA and the UAE, Mohammed bin Salman (MBS) and Mohammed bin Zayed (MBZ), the author compares the momentous ascension of the former to the rather traditional rise of the latter. He emphasizes the relationship between the two, and how MBZ acted as a mentor to MBS. The serious point in this discussion is the keen awareness of both leaders of the necessity of over-hauling their economies and diversifying them so as not to rely exclusively on oil.

To show signs of sultanism, the author delves into the issue of consolidation in both countries. The discussion centers on how both MBS and MBZ formed an inner circle of trusted lieutenants and advisors. However, the detailed discussion underscores how dynastic politics, always fraught, works within the traditional authority ambit. Competition among ruling elites was far more rampant in the nineteenth and twentieth centuries than today. The reason is that as the state and the bureaucracy became more complex, power became more defused, and various actors now have a slice of the pie. The narrative presented, though interesting, does not indicate a real structural change at the regime level.

The economy occupies an important position in the picture drawn by the author. In both countries, both regimes concentrate a great amount of wealth in their hands and their clients. The economy becomes an instrument of control and domination. The sultanic regimes have gobbled up the economic institutions, or as the author put it, MBS and MBZ “brought Saudi Arabia and the UAE’s key economic pillars under their personal control.” To be sure, the state plays an important role in both countries’ economies, a characteristic of oil-rich countries. Business elites found themselves on the defensive, in the face of an anti-corruption campaign in Saudi Arabia. Nonetheless, the private sector has grown exponentially under both political systems. The private sector contributes over half of the Saudi GDP. The private sector in the UAE employs over 5 million out of a total labor force of 7.241 million— and Dubai Emirate is the embodiment of the private sector. Second, despite both governments’ impetus to rationalize their economies, social benefits are continuing incessantly in both countries. The ruling bargain with the populace is still intact. That much, at least, the author concedes.

The book continues the same theme while missing the deeper issues that provide legitimacy and stability for both political systems—a case of a paradigm as a hindrance to understanding to borrow Albert Hirschman’s phrase. Three important issues the author raises towards the end illustrate the point: The rise of the national security state, lack of democracy, and state-induced patriotism.

The national security state is a global phenomenon, and in the case of both countries is a response to transnational terrorism, regional upheavals, and regional powers competition. Lack of democracy does not indicate a shift from one political system to another. Gulf countries never made claims to the contrary. Recently a Saudi official admitted: “We are not a democratic paradise on earth!” The real point that the book misses is that a traditional regime bases itself on reciprocity between the ruler and the ruled. When one side fails to fulfill its end of the bargain, conflict ensues. Ironically, the delivery by the ruler of the social bargain has generated social mobilization, which has engendered tensions in the social contract. Moreover, the Eurocentric dichotomy of state and society does not hold in a traditional authority universe—the state and society are coterminous, and organically parts of a whole, a political community in Aristotle’s sense. The “end of the political community is a greater thing to attain and maintain, and a thing more ultimate, than the end of the individual.”

It must be added, the penultimate chapter is quite revealing as the author heroically struggles to fit the cases into his sultanic procrustean bed.

Dr. Albadr Alshateri was a professor at the UAE National Defense College in Abu Dhabi. He earned a Ph.D from the University of Michigan in comparative politics, international relations and political economy as well as two masters degrees in political science and in Middle Eastern and North African Studies. He holds a BA from Indiana University, where he studied political science and Near Eastern Languages and Cultures, as well as a certificate in African studies. Dr. Alshateri has received numerous awards, including a prize for his dissertation entitled “The Political Economy Of State Formation: The United Arab Emirates in Comparative Perspective”, from the Society for Arab Gulf Studies (USA). Dr. Alshateri has contributed articles to Al Ittihad Newspaper (Abu Dhabi), Al Khaleej Newspaper (Sharjah), The National (Abu Dhabi), American Diplomacy, and Gulf News (Dubai).