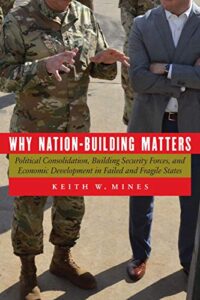 In the August 2021 issue of The American Diplomacy Journal, several authors took up the theme of challenges to the world of failed and failing states. In Why Nation-Building Matters, active-duty Foreign Service Officer Keith Mines returns to that theme, never more salient than in the wake of the U.S. withdrawal from Afghanistan. Amid the crescendo of voices warning of the futility of nation-building efforts, Mines’ superb book offers an opposing view based on decades of personal, on-the-ground experience, both in the military and the foreign service.

With compelling examples, Mines details eight U.S. attempts to rescue states in crisis on three continents over several decades: in Colombia, Grenada, El Salvador, Darfur, Somalia, Haiti, Iraq, and Afghanistan. He was an eyewitness, indeed participant, in all eight projects. Despite obvious differences among the cases, Mines argues that general principles can be applied for achieving nation-building success, whether or not the circumstances include military intervention or success that came long after the U.S. had left. And despite the enormous challenges, Mines makes a good case that it is in the U.S. interest to engage in these efforts.

In the case of Afghanistan, the recent heart-wrenching images of an insufficiently planned withdrawal, horrific in human and political consequences, have led many pundits to conflate the withdrawal with the entire mission in Afghanistan. “Nation-building” became synonymous with the disastrous withdrawal. A PBS/Maris poll of early September 2021 showed that 61% of Americans believe Afghanistan should determine its own future without U.S. involvement. A second notion that has found seemingly broad acceptance equates the success of nation-building in general with the success of military intervention, judging that military failure in Afghanistan is the same as failure in the other areas of U.S. intervention there.

Mines wrote his book before the withdrawal of U.S. troops from Afghanistan, but vivid descriptions of his work during two assignments there, in 2002 and again in 2012, offer a rare and much-needed deep dive into overall U.S. efforts in Afghanistan. The current circumstances create a tough — and urgent — backdrop for Mines’ analysis of the benefits and dangers of nation-building as well as the potential dangers of its absence, in Afghanistan or elsewhere in the world.

With his real-world experience, Mines brings to life the many complexities of these efforts. He addresses not only the ‘yes or no’ of nation-building in principle but makes clear the many simultaneous considerations and steps necessary to its success. When the aim is assigning failure, it is easy to overlook the tremendous obstacles and challenges that each enterprise faces, whatever the country and its circumstances.

Mines emphasizes the importance of understanding the local environment, analyzing and assessing the needs, and developing a plan to address them to fit that environment, often different in rural and urban areas in the same country. He also includes room for adjustment in mid-course as circumstances change. Getting Afghan warlords, entrenched by long history as well as recent events, to move from weapons to politics is a long-term, multi-faceted endeavor, which he describes clearly and persuasively.

Mines also underscores the importance of local perceptions. Positive perceptions can be as important as a successful project itself and misperceptions can result in dangerous and destructive outcomes. Understanding local circumstances requires sensitivity as well as knowledge. It also includes finding a balance between visibility as the purveyor of progress and keeping a distance so as not to spark nationalism against the presence of a foreign “occupier,” requiring nimble adaptation. Getting the balance right, Mines argues, often determines whether a project is accepted or sunk, which in turn can lead back to war. Mines also reminds the reader of the devastating effects that events even thousands of miles away can have. The attempted burning of thousands of Korans in Polk County Florida by a right-wing pastor resulted in the murder of several U.N workers in Mazar-e Sharif in 2011 during a protest.

In Afghanistan, and I would venture in general where development efforts are taking place, visible projects have been important symbols of broader success. Such projects can lead to confidence and even patience on the part of local populations when confronted with the often-slow pace of change. Positive developments take long, hard work, but the negative flies at lightning-fast speeds. The wisdom of these admonitions may seem evident, but it is surprising how often they have not been heeded.

Another leitmotif in Mines’ book is that staying power is essential in all such capacity-building efforts, something for which U.S. policy makers and the American public are rarely prepared. At his departure in 2013, Mines describes Afghanistan as a “completely unfinished project” demanding not only security assistance but ongoing economic support to see gains solidified especially in rural areas. Mines emphasizes Afghan security forces’ dependence on Allied backup in the ongoing skirmishes between Afghan forces and the Taliban at the time. He describes the closure of the Provisional Reconstruction Teams, small, allied military and civilian outposts in Afghanistan’s provinces, beginning in 2012, which had already resulted in setbacks for Afghanistan’s security forces not ready to hold the gains alone, perhaps a harbinger of the rapid fall of Afghanistan to the Taliban in 2021.  Underpinning it all is the commitment to leave behind a nation that can do for itself what we have been doing or supporting. And this requires patience. To ensure sustainability of the investment, the training wheels should not be removed too early.

Mines also reminds the reader that success sometimes also comes later, such as in Sudan — and it may yet in Afghanistan. Neither should one forget where we started in gauging success. In condemning or dismissing nation-building too early, we overlook subsequent success because we have moved on. He contrasts the demands of and conditions for stability in today’s fractured world with the relatively uncomplicated situation of WWII and post-war reconstruction. As Mines defines it, the nation-state exists (successfully) when its two components coalesce: a sense of nationhood supported by the institutions that allow it to function. And he maintains that the nation-state is still the core for international order.

Despite the wealth of insider detail, Mines’ book is an accessible and engrossing account, a combination of clear-eyed analysis and compassion for the human dimension. Beyond providing tremendous factual testimony, he depicts personalities and communicates the significance of events in beautifully rendered assessments, such as “success was underwritten by lives lost” – the lives of soldiers and diplomats, Americans and allies, and Afghans themselves.

Mines is not wearing rose-colored glasses. He does not dispute that often results are far from perfect. In his assessment of the current situation in Darfur, for example, after decades of work to find a permanent solution to its civil war, Mines accepts that “holding off the worst until something better makes itself available” is a valid goal. He openly describes setbacks in many international efforts, acknowledging that analyses are not always correct even on the ground and/or that correct analysis is sometimes disregarded in Washington. Certainly, it is valid to ask why only one per cent of Afghans were vaccinated against covid when the U.S. withdrew; is this not part of building national capacity? And, how far and how long can we own a country’s problems when we engage in nation-building? With all these challenges to getting it right, is it even worth U.S. blood and treasure?

Mines arrives at a conclusion different from those who would eject nation-building from our toolbox, arguing that nation-building is firmly in the U.S. interest and that we have been more successful than often described or credited. He does not say it works all the time, or that it is easily achieved, but does provide ample evidence for why it is in our interest to try.   He makes the case for nation-building not because it is an easy silver bullet but because the alternative is worse, not because it is generous and right, but because in today’s world, if left untended, the problems will surely return – after they have gained in strength, widening insecurity that knows no borders.

In his epilogue, Mines puts his extensive experience to the task of proposing the outlines of a nation-building doctrine similar to the doctrine used for military engagements. Whether someone has little experience in nation-building efforts or has participated often, this is a must-read book for evaluating whether nation-building is doomed to failure or serves the U.S. national interest, and how we might do it better. 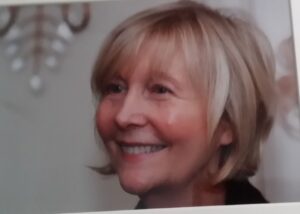 Renee M. Earle is a retired Public Diplomacy Foreign Service Officer with the rank of Minister-Counselor. She served at embassies in Turkey, USSR/Russia, Kazakhstan, the Czech Republic, France, and the U.S. Mission to the European Union in Brussels. Domestic positions with the Department of State included Diplomat-in-Residence at Duke University in North Carolina, Acting Office Director of Public Diplomacy in the European Bureau, and Chief of the Central Asia Division of the Voice of America, where she directed the Pashto, Dari, Farsi, Uzbek, Azeri, and Turkish language services. Her assignments in Europe and Washington included information outreach about U.S. involvement in Afghanistan and Iraq.

She currently serves as the Publisher of American Diplomacy.