The Enduring Struggle: The History of the U.S. Agency for International Development and America’s Uneasy Transformation of the World 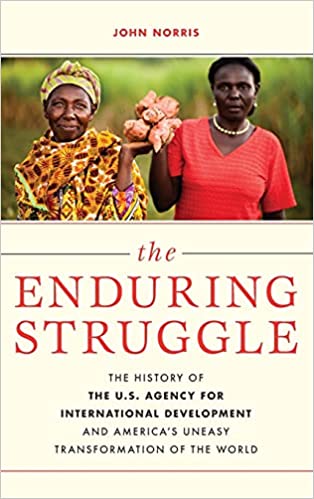 John Norris’ book, The Enduring Struggle: The History of the US Agency for International Development and America’s Transformation of the World, comes at a most opportune time. We need a fresh look at the ways we prioritize national interests and the institutions in our national security triad—defense, diplomacy, and development–responsible for protecting them. No agency involved in national security is more overlooked or less understood than the US Agency for International Development (USAID), the country’s lead agency for development and the foreign assistance programs to deliver it.

Norris fills the void. His history provides a comprehensive overview of an agency with remarkable accomplishments, but which—despite impressive successes—has often fallen short of expectations and whose history is filled with no little controversy. Norris describes foreign assistance as one of the US government’s potentially important, but least recognized tools, to effect global change: “No other area of presidential decision-making in the modern era has affected more people, more profoundly, and with so little foreign fanfare than the foreign aid program.”

The lack of fanfare has had costs. As Norris points out, the general public has “the mistaken belief that such assistance is the single largest item in the federal budget when, at less than one percent, of all discretionary spending it is far from being so.” Congressional representatives have “vied to outdo each other with ever-more lavish denunciations of foreign aid.”

As a result, Norris relates, though designated as the lead development institution responsible for foreign assistance, USAID’s primacy has been increasingly challenged by the steady growth of overseas programs run by dozens other departments—State, Agriculture, Commerce, Treasury, among them—and new institutions like the Millennium Challenge Corporation and the US Development Finance Corporation. It is far smaller than the other key institutions in the national security triad.  Its workforce is about one-sixth the size of the State Department, and there are more than three times the number of soldiers in military bands than USAID has foreign service officers; its $20 billion budget is three percent that of the Department of Defense.

It is time to re-examine national security priorities and the role of development. A world-wide pandemic has killed more than four million (more than 650,000 in the US alone) and reversed decades of progress in health, education, economic growth and cutting global poverty. Sea level rise, baking heat, tornadoes, hurricanes, droughts, wildfires and floods, all aspects of climate change, present existential threats to island nations and critical urban centers; they have already exacerbated competition for scarce resources and led to widespread displacement.

These challenges to our national security cannot be met by the go-to military tools we’ve relied on to counter cold war, political-power threats from malign states, or more recent threats from non-state terrorism. Their rise, coupled with the traumatic collapse of Afghanistan, may force a rethinking of the balance between defense, diplomacy, development. Because these new challenges cannot be met by force or negotiation alone, attention may focus increasingly on development and USAID’s role in managing foreign assistance.

A recalculation of the balance between defense, diplomacy, and development may have already begun with President Biden’s decision to appoint Samantha Power as Administrator of USAID and to make her a standing member of the National Security Council. Not since President Kennedy created USAID in 1961, rationalizing a proliferation of foreign assistance programs and including its head in national security sessions over which he presided, has USAID had higher expectations for the role it should play. There are real questions—not about the need—but whether it can measure up.

Norris takes a serious look at these questions. He describes how, over its 60-year history, the Agency has earned consistent support from Congress and successive administrations to survive repeated threats to its programs; through periodic attempts to change its mission and shape, it has labored to represent America’s values in its response to manmade and natural disasters, health crises, economic failures, and democratic transitions. He chronicles a complicated story, using anecdotes drawn from interviews and oral histories to give political context and a contemporaneous human perspective to tumultuous fights over the Agency’s budget, purpose, programs and even very existence. He describes the Agency’s many successes—for example, the green revolution in agriculture which saved millions from famine, stunning progress in maternal and child health, economic growth in Taiwan and Korea, and educational advances in India. He cites USAID as an early model for other countries—encouraging foreign assistance around the world and building what he describes as a “community of donors.” But he also points out its failures, particularly when “the United States tried to use foreign assistance as a blunt strategy instrument.” Alluding to USAID’s role in Vietnam, Iraq, Egypt and Afghanistan, where it has had its largest programs in terms of budget and staff and encountered some of its greatest criticism, he writes, “Instrumentalizing foreign aid to help achieve short-term military or diplomatic aims has never worked well, and there is no indication it will do so in the future.”

He concludes by describing a flawed agency with a mission of ever greater importance. “Bogged down in rules, regulations, reporting and earmarks by Congress and its own bureaucracy”….”process has often crowded out substance.” The need to report in ever greater detail to Congress has meant that the Agency has shaped programs by their ability to be measured rather than by their importance. When the essence of development is educating leaders and building institutions, focusing on the number of workshops held or schools built may be missing the point. His conclusion: “AID itself is in need of a more radical transformation if it is to address a new generation of challenges.”   Even more, the US needs to make a major adjustment in the way it calculates its national security priorities and support for the institutions charged with pursuing them.

Making that adjustment will require a better understanding of USAID as the US government agency best positioned—if not necessarily staffed, equipped and ready—to craft and implement the policies and programs required to meet existential national security challenges like climate change, mass migration and infectious disease. Norris’ well-articulated review of that agency’s history is a good place to start toward that understanding and should become required reading for academics, practitioners and policy makers interested in balancing our approach to these escalating threats.

A former Professor of National Security Studies at the National Defense University and retired Foreign Service Officer with the US Agency for International Development, Desaix “Terry” Myers began work with USAID in East Pakistan in 1969. He went on to serve in Washington, D.C., Senegal, India, Burma and as Mission Director in Indonesia (1998-2003) and Russia (2003-2007) before moving to the Industrial College of the Armed Forces (now the Eisenhower School) 2007-10 and the National War College until 2016. He is the author of three books and a variety of articles and chapters, most recently, “The US Agency for International Development: More Operator Than Policy Maker,” in The National Security Enterprise (Georgetown University Press 2017).