Home / Commentary / Towards a New Normalcy?

Editor’s Note: American Diplomacy Journal asked several foreign policy commentators to address the significance of growing chaos in many parts of the world, as failed and failing states are increasingly unable to perform the fundamental functions of the sovereign nation-state. This is one of five articles looking at those concerns.

“The current coronavirus crisis emphasizes the need for the European Union to devote more effort to anticipatory governance, notably through analysis of medium- and long-term global trends, as well as structured contingency planning and the stress-testing of existing and future policies.” – European Parliament study, April 2021

Europe is the spiritual home of anarchism. But it will argue that failed states are a third world phenomenon, while conveniently forgetting that such failure is often, or at least partly, a consequence of its colonial rule. Today’s European Union (EU) is not plagued by anarchy nor by outright failure. But its growth pains, and now the Covid pandemic, have sharpened its strains of governance. There are areas of Europe where anarchy and failure are real and the EU is either unwilling or unable to act in mitigation. A new US administration, seeking fresh partnership with Europe, has a vested interest in looking at what anarchy and failure might do to its European partners. This essay looks too at Europe’s immediate neighbourhood where state failure – and failed European response – are rife. Politics starts at home. So let’s first look at that. President Biden during his June tour of Europe will certainly have done so and wondered how politically solid, predictable and reliable the re-discovered European partners are.

Once Upon a Time

Christmas 2019. Europe’s political scene looked smugly self-satisfied. Shared animosity towards President Trump helped. The economy sailed along. Even Brexit looked controllable. Inequalities seemed tolerable. Some debated prospects for a more balanced and human capitalism. Chancellor Merkel surfed on the height of her reign. President Macron had the insurrectionist threat of the gilets jaunes largely behind him. Stock markets were firm. Then the bug struck.

Scorn now condemned governments’ unpreparedness, their feeble efforts to cope, their panic matching that of their citizens as deadly statistics mounted. Dreams of ultimate return to normalcy gave way to speculation about some “new normalcy”. Society split into rival camps of the cautiously prudent and returners to normal life. Speculation about vaccine development lurched between despondency and euphoria. Was society coming apart?

Towards a New Normalcy…

Pundits on both sides of the Atlantic – more particularly in Europe perhaps – enjoy speculating about what a post-pandemic society and polity will look like: new identity and purpose of cities; more nature-friendly farming and nutrition; innovative work ethic and practices; climate change taken more seriously; new balance between the rights, privileges and obligations of individuals and society; more inclusive and responsible capitalism. Has Covid further fuelled inequalities of wealth as some analysts[1] maintain? One could go on. As the pandemic grinds on the strains grow in western Europe, as do the sociological challenges and their political implications. Much is speculation about what society and its governance might or ought to be.

Europeans have often predicted the demise of classical party politics and the left-right divide. Without much actually happening. Now perhaps it is. With perhaps a growing voter taste for more anarchic formulae. Classical European social democracy declines further. Germany’s Social Democrats (SPD) look set for punishment in September’s election. France’s Parti Socialiste is increasingly marginalised and chewed at by the left. President Macron’s not-really-a-party, La République en Marche, looks like a prematurely aged bird losing feathers daily. Spain’s socialists cling to power. Britain’s Conservative government looks ragged and incompetent but the opposition Labour Party squirms in an identity crisis. Green parties may be on the rise, particularly in Germany, but others are stealing their clothes. The classical right of centre in Europe looks superficially intact but more radical alternatives yap at their heels.

EU institutions are wiping mud off their faces. “Brussels” is widely criticised for being too slow, too late, too bureaucratic in formulating a collective EU response to the pandemic. The British, newly “liberated” by their cherished Brexit departure from EU membership, have whooped about their comparatively higher vaccination score. In fairness, the EU showed its determination to seek a collective solution for all its member states and citizens. No mean feat when servicing 27 countries, with the bigger ones readily tempted to go it alone.

How will the brave new world play out between Biden and Europe in these shifting sands with neo-anarchist Trump having taken a back seat – for now?

So those are the toil and troubles of America’s re-discovered European Union partner. It doesn’t, of course, end at the EU’s frontiers. Europeans are too introspectively pre-occupied to worry about failure in their immediate neighbourhood or its shadow. Six particular examples or related issues spring to mind: Belarus, Northern Ireland, the Sahel, Britain’s foreign aid cutback, the western Balkans, Lebanon. The list is extendable.

In summer 2020, protesters took to the streets against President Lukashenko’s rigging of elections confirming him in power, and looked like they were having an impact. A year later the streets of Minsk are silent, brute force crushing all but token resistance. Russia props up an otherwise failed state. EU sanctions have little obvious impact, with more geographically distant EU member states indifferent. EU foreign affairs chief Josip Borrell visited Moscow in April for dialogue, only to be treated with contempt by Putin. For Russia, Belarus is primarily a bulwark against western incursion. That’s how Russia wants Ukraine to be too. NATO membership of Ukraine and Georgia was a marginal issue at the June NATO summit. For Moscow the eastern limits of EU influence are clearly staked out. The impending final breakaway of the Ukraine’s rebel, russophone, eastern Donbas-Donetsk region will drive that message still further home.

The EU-British Brexit deal, clinched on the eve of Christmas 2020, contained a protocol defining the trade status of Northern Ireland. Thus Northern Ireland remains part of the EU single market, together with member state the Irish Republic. For that to work, customs checks are imposed down the Irish Sea on trade between Northern Ireland and the rest of the United Kingdom. Two consequences now loom: the collapse of the Brexit deal and renewed violence as Protestant and Catholic ultras go on the rampage. Forms of state failure of America’s closest allies threaten Europe’s western Atlantic seaboard.

For a decade France’s soldiers have struggled to prop up frail governments of its former colonies in the Saharan wastes. Finally, in June, Paris announced it was suspending military operations in Mali, ostensibly in protest against a coup. Looming presidential elections in spring 2022 are not foreign to Monsieur Macron’s calculation. Jihadists and others read into this a broader French – and wider European – disengagement from the Sahel. Russia too sees opportunity to cause trouble in this former European chasse gardée where semblance of government weakens progressively.

Europe’s southern flank is its Achilles’ heel. Bismarck said it wasn’t worth the bones of a Pomeranian grenadier. In practice Bismarck was, as often, being less than honest. There is a serious risk that the EU, struggling with the pandemic, will look even more inwards, hoping Balkan problems will go away. They won’t. The United States, which came to the rescue after Yugoslavia’s civil war with the Dayton agreement, has decided that this region is now Europe’s business. For that matter, out of the EU’s 27 member states, while a clutch of Balkan countries may not be described as failed states, they are fragile. In Bulgaria and Romania EU norms of governance are thin. Greece has progressed but remains vulnerable. Croatia dislikes being called “Balkan” but struggles to become a modern European state. Then there are the others – Albania, Bosnia-Hercegovina, largely unrecognised Kosovo, Montenegro, North Macedonia, Serbia. All fail to undertake the one big step that would help the EU to help them – cooperate in mutual economic integration essential for a viable future and providing the leverage upon which EU assistance can work. Meanwhile China exploits Balkan opportunities, with Russia not far behind.

Surrendering to right-wing Tory pressure, Britain is cutting its foreign aid budget from the OECD standard target of 0.7% of GDP to 0.5%. London had already abolished the independence of its respected equivalent of USAID, merging it into the Foreign Office. Such British aid activity as remains will tilt further to supporting British trade interests. Cutting development aid, when Covid strains public spending, has not worried public opinion much. The trouble is that governments elsewhere in Europe may see this as a precedent. Some will argue that development aid’s impact on governance standards in fragile countries is marginal. Perhaps, but properly targeted it helps. Cutting it sends the wrong signal.

Lebanon has struggled with state failure for decades. Outside interference – be it from Syria, Iran or Israel – or even the United States – bears much of the responsibility. But no less a culprit are the corruption and squabbling of Lebanese elites. France over the centuries has dabbled in Lebanon. More recently President Macron has tried to lean on Beirut’s elites, only to throw in the towel. The EU sometimes utters sympathetic statements. But otherwise Lebanon is the epitome of EU shoulder-shrugging about the Middle East. Now that the United States is lowering its profile in the region, Europe’s indifference stands out more starkly.

United States policy has more or less consistently pressured Europe to take on worldwide responsibilities and promotion of European defence. Europe often replies that it does share the global burden by its action in development and humanitarian aid and by its promotion of free trade. There is truth in this. Right now, however, Europe, like the United States, is pulling in its horns on several fronts.

The signs of political fragility in the EU are carefully analysed and registered by the professionals who populate Moscow’s foreign service and military intelligence (GRU). Has the US State Department, fresh from its mauling during the Trump era, re-developed the same capacity? Surveying Europe and its immediate neighbourhood may not reveal failed states riven with anarchy – but nor is this a picture of solidity. The European Project has always been tortuous, the level of support for it from European citizens often volatile. We now enter into a more advanced phase of difficulty and governance where not only the Project but the authority of its component states – the very acceptance of public authority in Europe – faces an unprecedented challenge. Anarchy feeds on vacuums – Europe is fostering them. 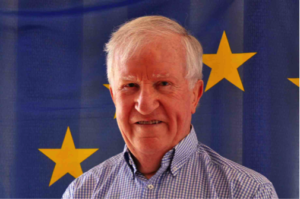 Robert Cox, born in London in 1938, read economics, politics, German and Slavonic languages at Cambridge University and the College of Europe in Bruges. After journalism with The Economist, and later in central Africa, Cox joined the European Commission as spokesman, then as a staffer in a Commissioner’s private office, before assignments in development policy and North-South Dialogue negotiations. As Head of the EC Mission in Turkey he experienced the 1980 military coup. Senior policy and management posts followed in EU public affairs remits. Cox served with the EU Monitoring Mission on the outbreak of the civil war in Yugoslavia. In 1992 he became deputy head of the new EC Humanitarian Office (ECHO). He lives in Brussels, painting, traveling, writing and working on contemporary challenges for Europe. He is married and two daughters and three grandchildren take up further time.