Home / Eyewitness / My British Exequatur, “By Her Majesty’s Command”

In order to join the U.S. foreign service, applicants pass through a gauntlet of written and oral assessments, physical examinations, and security clearance. Once those steps are successfully completed, the Secretary of State sends to the President for approval a list of those to be commissioned as diplomatic and consular officers. The commission is what makes one officially a Foreign Service officer. It’s our only badge of membership, unaccompanied by the diplomatic uniform or other regalia used by some other countries to denote diplomatic status. 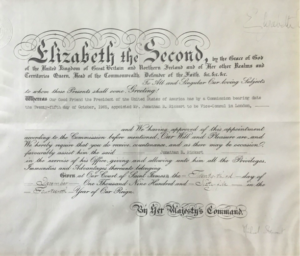 When I sailed into the port of Southampton in the United Kingdom on the S.S. United States on October 26, 1965, as a newly minted and very junior U.S. diplomatic and consular officer, I was armed with my diplomatic passport and commission, issued by President Johnson and signed by Secretary of State Dean Rusk. Those signatures, of course, were printed on the form, but my name, title, the date, etc. had been entered, elegantly in cursive, apparently by hand. The document, on velum-like paper adorned with an impression seal of the United States, looked to me more like a fancy university diploma than anything else. However, it meant that I was a “real” diplomat and authorized to take on the responsibilities required by my career.

To conduct consular duties, at least in those days in the United Kingdom, an additional document was required—an exequatur. An exequatur may be defined as “an official recognition by a government of a consul, agent, or other representative of a foreign state authorizing them to exercise the duties of office.” (By way of contrast, no such authorization was issued by the Romanian government when I served as a consular officer in Bucharest in the early 1970s.)

Though my exequatur did not reach me until the end of the year, long after I began exercising the duties of my office, it was worth waiting for. It states in part that “Whereas Our Good Friend the President of the United States of America has by a Commission bearing date the Twenty–fifth day of October, 1965, appointed Mr. Jonathan B. Rickert to be Vice-Consul in London and We having approved of this appointment according to the Commission before mentioned, Our Will and Pleasure are, and We hereby require that you do receive, countenance, and as there may be occasion, favorably assist him the said Jonathan B. Rickert in the exercise of his Office, giving and allowing unto him all the Privileges, Immunities and Advantages thereunto belonging.” Pretty heady stuff, even if most of it was just filling in the blanks on a standard form!

In the upper right hand corner of the document appears the handwritten signature “Elizabeth R,” while at the lower right, following the words “By Her Majesty’s Command,” is the signature of Michael Stewart, the Foreign Secretary. One wonders, of course, whether or not Her Majesty actually fills her idle hours signing exequaturs for lowly consular officers, of whom there must have been large numbers in the UK at that time. In the U.S., for example, such mass-produced signatures by Presidents or other high officials usually are rendered by Autopen or other technical means.

My curiosity led me to compare the royal signature on my exequatur with one appearing on a colleague’s. There were slight differences between the two, indicating at least that the signatures had not been produced mechanically. On the other hand, Her Majesty could have had an authorized signer to apply “her” signature to such documents, an arrangement that I observed in action years later when I worked in the office of a U.S. Senator. Who would blame her if she did?

I asked a friend, a retired senior British diplomat, for his opinion. While assuring me that Her Majesty is not “filling idle hours” signing the likes of my exequatur, he expressed virtual certainty that the Queen’s “signatures on the piles of documents passing through her hands are always genuine.” Reassuring but not definitive. Nevertheless, my framed exequatur, elegant in its grandiosity and regardless of the signature’s authenticity or not, is a valued reminder of my year in London. I hope that the Queen actually signed it but would be only slightly disappointed if it turned out that she did not.