Home / Eyewitness / Diplomatic Intervention Made a Difference in Suriname

The smallest and least populous independent state in South America, the former Dutch colony of Suriname nonetheless attracted an inordinate amount of U.S. government attention in the early 1980s, due to the presence of aluminum giant Alcoa and the fear that Cuba might use it to establish its first foothold on the continent. 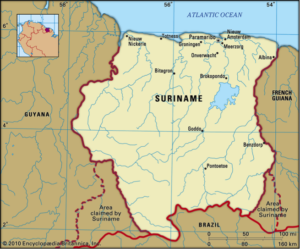 Although the U.S. embassy in Paramaribo had adequate personnel for “normal” times, it was not prepared for the situation following the so-called Sergeants’ Coup of February 25, 1980, led by Sergeant Desire “Desi” Bouterse, against the elected Henck Arron government. Following the coup, Bouterse gained effective control of the government as chairman of the country’s National Military Council (NMR) and, initially at least, sought support from Cuba and other leftist regimes.

Having seized power, Bouterse needed functioning ministries to run the government. Therefore, on March 15, 1980, he appointed a non-politically active medical doctor, Hendrick “Henk” Chin A Sen, as prime minister. That position had limited authority from the outset, since the NMR circumscribed the incumbent’s activities.

In the late spring of 1980, I was detailed to our embassy in Paramaribo for three weeks to fill in for the sole political officer, who was absent on urgent family business. With no deputy chief of mission (DCM), a single political officer position, and no resident defense attaché, the embassy was inadequately staffed to deal with the post-coup situation. At the time I was serving at nearby Embassy Port of Spain, Trinidad, and was scheduled to return to Washington in a few months to become desk officer for Suriname, Guyana, and Trinidad. The detail assignment gave me the chance both to support a shorthanded embassy and prepare for my upcoming responsibilities.

Ambassador Nancy Ostrander, who clearly welcomed any help she could get, greeted me warmly on my arrival and immediately put me to work. Calls were scheduled for me with several ministers, Alcoa representatives, the leading labor leader, and others, all of whom were grappling uneasily and anxiously with the uncertainties caused by the coup. She accompanied me on some, including a brief visit with the largely ceremonial president, Johan Ferrier, and with Prime Minister Chin A Sen. With the latter in particular we wanted to get his sense of where the country was headed and what could be done to keep it from falling under Cuba’s sway.

We found the prime minister to be deeply pessimistic. While he was quietly seeking the restoration of democracy, the NMR wanted to bring about a society with a socialist and revolutionary base, both ill defined. Indeed, Chin A Sen was so discouraged that he had decided to announce his resignation, he told us. He simply did not see what he could accomplish by remaining in his position.

To be clear, the prime minister was scarcely the white knight Suriname needed in its current straits, but there was no one better waiting in the wings to take his place. Moreover, his departure could have further strengthened the NMR’s grip on the country. We therefore set about persuading him not to resign, marshaling all the practical and theoretical arguments we could think of. Most convincing of all was when Ambassador Ostrander simply told him that the United States government supported him and wanted him to stay. That impressed him and seemed to do the trick. As we finished our interview, the prime minister said that he would not resign after all.

Immediately after our meeting with Chin A Sen, we returned to the ambassador’s residence, where we were met by the Dutch ambassador and his deputy. As Suriname was a former Dutch colony, the Netherlands embassy usually had good, if not the best, information on what was going on inside the country. The ambassador breathlessly told us that Chin A Sen had decided to resign and had been seen removing the pictures from his office walls. Ambassador Ostrander had the pleasure of being able to inform the surprised envoy that rumors of the prime minister’s resignation were premature and that Chin A Sen was remaining in office. A minor diplomatic coup indeed.

It is difficult to judge the results of that decision in their entirety. Chin A Sen remained as prime minister until August 1980 and then assumed the post of president as well. On February 4, 1982, Bouterse sacked him, and he went into exile. And Suriname itself went through some very difficult years, characterized by political unrest and thuggery, though the feared drift into Cuba’s orbit never occurred. Nevertheless, things well might have gone even more badly had the prime minister resigned at the time we met with him.

The lesson for me from this whole experience was that a credible U.S. diplomat, with the prestige and good faith of his or her country behind her, can influence events in a positive way. Such envoys can and often do convince, persuade, entice and even inveigle their foreign interlocutors into doing the right thing. And the good name of the United States, as promoted and defended by its diplomats, can and still does stand for something internationally.