Home / Commentary / When Diplomacy’s Reputation Needs Tending: Some Advice from the Past

Secretary of State Michael Pompeo raised a few eyebrows in August when he spoke, on foreign soil, to the Republican National Convention. Cabinet members, especially the Secretary of State, are held to a high standard in politics because they are meant to be custodians of the nation’s image. Many people regard party politics as tarnish on that image.

Yet, Americans have long championed a gift for image-making. Related to that has been a less cynical belief, even faith, in the appeal of the American way of life, the American dream, a “decent respect for the opinions of mankind,” and similar truths taught to every American schoolchild.

Today’s national mood and reputation challenge those norms in ways that do not bear repeating. The lamentations are omnipresent in print, on radio, on television, and online. What has been missing until only very recently has been the moral call to arms that usually accompanies such moments in American history.

Two such calls to arms – one from the 1920s and another from the 1950s – are worth revisiting, for they show that diplomacy plays an important role in repairing the country’s reputation, and that diplomacy’s own reputation needs constant, professional tending.

The first took place when, following the disruption of the Great War, an influenza pandemic, and a terrible recession (sometimes called the forgotten Depression), Americans posed questions about how they wanted the world to see their country, and proceeded to lay the foundations for what would become known as the American century.

One of those foundations was the nation’s diplomatic corps. Today’s foreign service came into existence in 1924 with the Rogers Act. The Act merged the hitherto separate consular and diplomatic services – the latter being known as a dumping ground for political and other undesirables – and established a competitive entrance examination and other professional standards.

The legislation was not widely popular. Consular officers, for example, resented being lumped in with so many “morons, fairies and neurotics… feeble sons of distinguished fathers,” as Ambassador William Bullitt once called his fellow diplomats (Bullitt was a political appointee).

The State Department’s final Third Assistant Secretary (the title disappeared after passage of the Rogers Act) was a man named J. Butler Wright. He had served in Russia during the Revolution (when he kept a vivid diary), and formed part of the founding generation of the modern foreign service that oversaw the implementation of the Act. He would go on to serve as minister to Hungary, Uruguay, Czechoslovakia, and Cuba.

In Wright’s papers at Princeton University there is a large scrapbook of material on the Rogers Act. Tucked into the scrapbook is a list of tips for aspiring diplomats. It reads as follows:

Be American first, last and all the time.

Do nothing to cast discredit on your country.

Be neat in dress and appearance.

Be courteous to all.

Be discreet in speech and conduct.

Be industrious, studious, thorough and punctual.

Be loyal to your chief.

Be as useful to your chief as possible.

Do not discuss your chief’s official or private conduct with anyone.

Do not criticize your Government’s policies or its high officials.

Never listen to anyone who speaks disparagingly of your country or your Government.

Suppress any partisan political feelings which you may have.

Remember that you are serving the present Administration.

Give no interviews to newspaper men at home or abroad.

Never write for publication without permission from the Department.

Remember that all Americans are your fellow citizens and treat them accordingly.

Observe carefully the social customs and conform strictly to the etiquette of the country where you are stationed.

Do not give a false value to social position or be influenced by titles in monarchical countries.

Remember that in a monarchical country it is your official position rather than your personality which usually gives you social standing.

Do not permit your judgment, your ideas of life or your Americanism to be affected by the attentions of an aristocratic society.

Never permit society to interfere with your official duties.

Be guarded in your choice of friends and associates.

Report to your chief information which you may consider of value to him or the Government.

Live modestly and always within your means.

Do not borrow or loan money.

Keep out of debt.

Remember that the Government is watching your conduct and career, and that merit always counts.

Remember that your future is in your own hands and not in the hands of your friends at home.

It’s difficult to imagine that list not producing a smirk (or worse) today from an entering class of the foreign service. Or maybe not.

One important continuity from the 1920s is the ability of American diplomats to present a form of pragmatism that, at least publicly, does not appear jaded, false, or cynical. It taps into a traditional view of Americans as the figure of Brother Jonathan (as seen below): provincial, shrewd (if sometimes wily), and oddly principled – in contrast to the corpulent, arrogant, self-righteous Englishman, John Bull.1 2 3 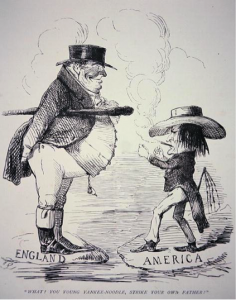 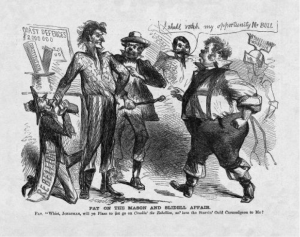 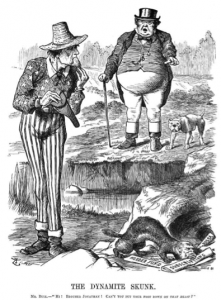 That the figure of Brother Jonathan gave way to a more stalwart and senior Uncle Sam usually representing the U.S. government rather than some or all the American people need not trouble us too much. Stereotypes have limited value. But a favorite stereotype can still tell us a good deal about the country’s image, which equips its reputation. As Wright and his generation of foreign-service pioneers showed with their own effort to bolster that image, reputations do rise and fall, and sometimes rise again.

The Value of a Good Reputation

What remains constant – in principle – is the value of a good reputation, as our second example, from the 1950s, illustrates. President Dwight Eisenhower, according to his Staff Secretary, frequently said a good reputation is worth countless battalions. Ike was troubled by the apparent transformation of his country’s reputation into something resembling John Bull’s. His view on reputation was similar to his idea of friendship with individuals and with nations: its value is greater than the sum of its parts. Tending to the mood, needs, and concerns of the parts means tending to the overall or “overarching” relationship, much as a gardener cultivates a garden.

In 1958 Vice President Nixon was jeered on his visit to Latin America. His car was pelted with rocks. So the following year Eisenhower went on his own goodwill tours to several countries. The images from these tours come close to speaking for themselves. Here he is in Britain, India, and Turkey.

Most visits by heads of state or government are contrived, and it is not possible to know what was going on in the minds of the cheering onlookers in those films. But certain elements are noteworthy: the open car, the absence of heavy security, the large banners with trite sayings about peace. Were they seen as trite at the time? This is almost the same thing as asking whether Wright’s list was sincere.

They were, and it was. Determining whether sincerity is genuine or false is subject to the historical imagination. It’s easy to dismiss both as captive to the mores of another era. But it’s also right to ask: What does it really say about the United States that such a list could be taken to heart in 1921? What does it say that ordinary people throughout the world cheered for an American president in 1959? What does it say to us, living in what many people describe as another low dishonest decade, that it is so difficult to imagine any of that happening today?

A decade ago, I wondered whether it was premature to call the years from the 11/9 fall of the Berlin Wall to the 9/11 Global War on Terror an interwar era. If it was premature then, it may still be so in 2020, for nobody can say what will happen next year, or ten years from now.

There are, nonetheless, these echoes from the interwar era of a century ago. Once again the American people and their government are neglecting many of their country’s international responsibilities as its leading thinkers on foreign policy spend their time debating abstract nouns (“neutrality,” “isolationism,” “primacy”). Once again peace and stability are under threat in many parts of the world. And, once again it is necessary to ask whether some version of principled pragmatism is recoverable and renewable.

It is. The United States still is more than a nation of Babbitts with nukes. But recovery and renewal suggest heeding a bit of advice from the twentieth century, and remembering what it is like to be honest, fair-minded, and reverent to the world.

Ken Weisbrode is a writer and historian. His books include Eisenhower and the Art of Collaborative Leadership, and The Atlanticists, where J. Butler Wright’s list also appears.