In 1986, Secretary of State George Shultz tasked Deputy Secretary John Whitehead with responsibility for overseeing U.S. relations with Eastern Europe. Following the advent of Mikhail Gorbachev’s tenure as General Secretary of the Communist Party of the Soviet Union in 1985, there were some hints of a possible adjustment of Soviet policies toward the so-called “satellite” countries of Eastern Europe. The naming of Whitehead to oversee U.S. relations with the region demonstrated the importance the administration placed on it and the hope that we could promote, encourage, or induce some positive changes there.

As Whitehead described it in his autobiography, A Life in Leadership, his initial plan for fulfilling his mandate was “to visit those countries, tell the governmental leaders our concerns about their undemocratic conduct and their human rights violations, listen to their concerns, and, of course, dutifully show them that we regarded them as ‘differentiated’ countries in accordance with official policy.” It was in this context that he arrived in Sofia, Bulgaria, where I was serving as Deputy Chief of Mission, at the end of an initial swing through the area that had taken him to Hungary, Poland, and Romania in November 1986. 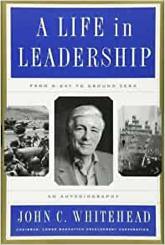 About Bulgaria, Whitehead wrote that “of all the countries in the region, it was the most corrupt and brutal, and it seemed the least likely to change” (as one with experience in Eastern Europe, I would have ranked Romania as “worst in the region” at that time, though not by much). His was the first visit to Sofia by so senior a U.S. official in many years.

Whitehead was a cousin of my mother’s, although we had met only a few times. When he disembarked from the plane in Sofia, he greeted me with a cheery “hello, cousin,” a gesture that was not lost on the Bulgarian functionaries standing nearby. It made no difference that we barely knew each other.

Whitehead gives a colorful description in his book of his subsequent meetings with Bulgarian dictator Todor Zhivkov. Alhough I did not attend those meetings, I was present during his subsequent visit as note taker, on February 5, 1987, at the official luncheon offered by Zhivkov at the modern, cavernous, and totally un-cozy Boyana Palace. On that occasion, the Deputy Secretary graciously complimented the Bulgarian leader on the quality of the local wines that were served. Zhivkov replied that he had been told that his country’s wines were excellent and believed it to be true. As for himself, however, he could tell the difference between red and white wine but no more than that. Throughout the lengthy and elaborate, multi-course meal, Zhivkov drank only beer, poured from the can by white-gloved waiters into his crystal glass. He made a few other self-deprecating remarks during the luncheon, something that I cannot imagine any of his dour and humorless fellow Eastern European dictators (Ceausescu, Honecker, Husak) ever doing.

It was during this second visit that my wife Gerd and I had the honor and pleasure to offer a luncheon for Whitehead and his party at our apartment, on February 4. It was an occasion that our daughter Ulla remembers well, since it caused the postponement of our plans to celebrate her tenth birthday that day, a big deal for her at the time.

Victories, even minor ones, were few and far between at that point in our dealings with communist Bulgaria. The regime held all the cards and was not loath to use them, particularly when doing so would inconvenience or embarrass the United States. However, my kinship with the Deputy Secretary did lead to a satisfying little win in the run up to Whitehead’s second visit.

A few days before the Deputy Secretary arrived, I had been summoned to the office of Mr. Nikolov of BODK (the Bulgarian Service Bureau for the Diplomatic Corps), a frequent bureaucratic nemesis of ours. His “service” organization was an adjunct of Bulgaria’s Darzhavna Sigurnost (DS) or state security. He had a serious complaint to raise with me about Dean Kauffman, the director of the Anglo-American School of Sofia, of which I was the board chairman. With ill-concealed glee, Nikolov informed me that Kauffman had been caught conducting Christian proselytizing of Bulgarians. This was a proscribed activity, which meant the school director would be expelled from the country.

It is entirely possible that the charge was true, since Kauffman and his wife both were energetically evangelical Christians. Nevertheless, I responded that, even if the school director had engaged in what the Bulgarians considered to be improper behavior (and which we certainly did not), expelling him would be an extreme step, a serious blow to our school, and unacceptable to our embassy. When Nikolov remained adamant in his position, I replied that if the Bulgarians insisted on kicking Kauffman out, I was certain that my cousin, John Whitehead, would want to raise the matter directly with Zhivkov during his upcoming visit. That was the last I ever heard of Kauffman’s “offense” and the proposed penalty; the school director remained in place.