Newark, New Jersey is rarely thought of as a diplomatic center, but four countries operate consulates there: Columbia, Ecuador, El Salvador, and Portugal.

Portugal opened its Consulate General in Newark in 1965 in an effort to connect with and serve the large Portuguese community in the area. (Newark is not the only U.S. city with such a presence; it is one of 19 Portuguese diplomatic missions in the United States.) As explained in a 1995 New York Times article, “the Portuguese have been fanning out across the globe since the days of Magellan. In the late 20th century, many have headed straight for Newark.”

According to former Portuguese ambassador Júlio Vilela, Portugal cannot separate its diplomatic activity from immigrants, given that, historically, it is a country of outward migration that has forged relations with peoples on every continent since its founding in 1143. 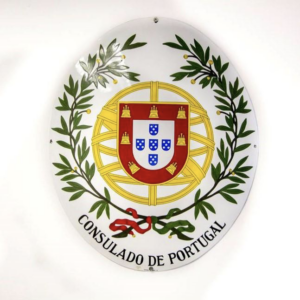 Local authorities and consular registrations show that, at the end of 2018, the Portuguese community living abroad was estimated at around 5.4 million Portuguese nationals and descendants. This data places 56.7% in the Americas, 30.1% in Europe, 7.5% in Africa, and 4.9% in Asia.

The Consulate General in Newark organizes cultural programs, such as photograph exhibitions and Portuguese movie sessions. Pedro Monteiro notes that the consulate’s José Rodrigues Miguéis Hall, named after a writer from the Portuguese diaspora who lived in the New York area, hosts a variety of events organized by the Portuguese community.

Permanent community works include an azulejo glazed tile panel depicting Amália, a renowned singer of fado. Prior to the COVID-19 pandemic, the consulate collaborated in hosting a fado festival in Newark. The consulate has also worked with the New Jersey Performing Arts Center (NJPAC) in promoting events that include this Portuguese musical genre, making Mariza, a Portuguese female fado singer, known to the American public.

The Camões Institute, a Portuguese government-funded language and cultural center with a branch in Newark, aims to make cultural resources and activities available to Portuguese and American communities. Cooperation agreements between the Camões Institute and Rutgers University promote research into Portuguese literature. Such cooperation seeks not only to strengthen the ties that join the community of Portuguese people and those of Portuguese descent to its culture, but also to disseminate Portuguese authors to Americans. The institute organizes events in partnership with local schools and universities, enabling direct contact with authors and their works.

Portugal’s Foreign Ministry stresses the strategic importance of the nation’s artistic heritage and recognizes the benefits the country receives from the highly positive view that Newark’s Portuguese community has of their country of origin. Their emotional attachment to Portugal is one that Portugal’s diplomacy works to maintain and strengthen.

Jorge Marinho is founder and editor of the Marinho Media Analysis. A more extensive version of this article originally appeared in Marinho Media Analysis on April 7, 2022: http://www.marinho-mediaanalysis.org/articles/cultural-and-art-diplomacy-the-example-of-portugals-consulate-general-in-newark-new-jersey-united-states

Júlio Ventura and Guilherme Guimarães are MA students who served as interns at the Consulate General in Newark January-April 2022.