A recent RAND Report on “The Foreign Service and American Public Opinion” (https://www.rand.org/pubs/research_reports/RRA1845-1.html) reveals how little the American public knows about diplomacy and foreign affairs. For the report, which goes much deeper than most foreign policy polls, RAND surveyed representative samples of Americans over a two-year period (2020-2021). The results are not surprising, but they are worrisome for anyone interested in national security policy and prosperity.
This report and conclusions highlight the deep ignorance of Americans about diplomacy, its policies, and its practice.  The “no opinion” responses in some polls and the “I-never-knew-that” replies in some focus groups—even on basics—can range from 25% to 50%. 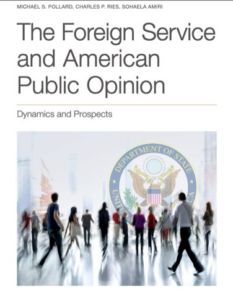 From my decades as a diplomat, I see three major factors behind this national lack of understanding.  These include the way in which diplomacy has been devalued since the Cold War, the dumbing down of our media, and our inability to explain foreign policy to the average American.
There is, however, reason for hope, if those interested and involved in foreign affairs (journalists, diplomats, industry and financial leaders, academics) undertake, as a high priority, major efforts to inform the public on international issues. The hope contained in RAND’s report lies in more favorable responses once the facts and background were explained to participants in the focus groups. Results strongly indicate that telling Americans what diplomats do and why they do it brings substantially more support for doing it and paying for it.

The Devaluation of Diplomacy

Foreign affairs professionals know that, since the Cold War, foreign policy and its primary tool, diplomacy, have been devalued in the minds of the American public. These do not have the public support they had during the Cold War.  This is not a partisan problem, neither in its origins nor in its eventual correction. It is a national problem. As the RAND report shows, Americans simply do not understand diplomacy.

Americans’ understanding of diplomacy has never been very deep, even during the Cold War. But during those 45 years, the public understood that diplomacy was important in securing American interests. The public certainly saw it as a more effective national defense than nuclear war.  Diplomats, therefore, were understood to play critical roles in national security and defense.  Indeed, diplomacy was central to that Cold War success. 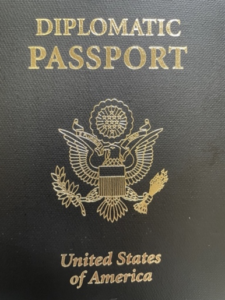 That is far from the attitude of Americans today. Rarely, if ever, do diplomats—“our service men and women not in uniform” —hear expressions of gratitude from the public or national leaders for their efforts and sacrifices. This is ironic because this generation is ending its careers in which they have been killed by hostile action at rates far higher than in prior generations.

Diplomacy is dismissed as a resource drain whose objectives are obscure and whose successes are secondary or tertiary. Although some members are supportive, Congress through word and action consistently over many years reinforces this dismissive attitude, especially when it comes to budget expenditures. Attitudes in the Congress reflect those of the public, and representatives are attuned to the electorate.

This delusion is institutionalized in the House of Representatives. Foreign policy is beggared through budget cuts. The Committee’s benighted and destructive action arose from a distorted vision of a central pillar of national security—foreign policy and diplomacy. Congressional disregard for diplomacy and fascination with force undermine national security.

The foreign affairs community and our allies are not alone in recognizing this serious weakening of national security. Several secretaries of defense and multiple four-star military leaders have called attention to it. They consider that it weakens not just diplomacy. It puts additional burdens on the military, which has the money, but not the mission or the expertise. Yet, the situation continues and, without determined efforts, will not change.

The Decline of Press and Media

Topping the list of reasons for the public’s lack of knowledge and devaluation is the most difficult one to correct—the decline of American journalism.

It shows in the crisis in the written press and in the failure of the cable media to properly inform the citizenry, especially in the area of foreign affairs.  The economics of publishing newspapers outside of major cities is disastrous. Even most city newspapers cannot afford to report and print international news adequately. Suburban and rural papers make no attempt. It is time to recognize that the backbone of once proud American journalism is broken and needs fixing or the knowledge base of citizens will decline further.

The main instruments of decline, however, are the 24-hour news cycle and the technology-driven social media that distort and displace news.  There is not 24 hours of news in any day, much less every day. This leads to “info-tainment,” not news. One or two tragedies or major events are rehashed for hours, displacing adequate reporting of other important news. News from distant parts of the globe is rarely and poorly covered.  Panels of talking heads with video clips homogenize news and opinion, blurring rather than clarifying them. Information tidbits become “BREAKING NEWS.” Viewers jump from over-hyped info-tainment to sports and other entertainment, uninformed by all three.

BBC is an “all news” broadcaster that avoids info-tainment by having program content focused by region.  With different on-camera personnel, news and information are carefully distinguished from opinion.  CNN, Fox and MSNBC., in contrast, have developed an easy, profitable way to capture an audience, but not to inform it.

To further muddle the picture, social media networks undermine humane discourse on social, political, economic, and international topics.  The computerized mass distribution of unsubstantiated facts and opinions corrupts civic dialogue.  This corrosive social acid is distributed on the same networks as friendly chatter and photos, as if they were identical.  They are not.  The public is ill-served on airwaves and the internet, which should be public service channels of communication.

A final observation relates to the mistake diplomats, the nation’s international affairs community, and national leaders make in response to this devaluation of diplomacy. Many of us in this arena give speeches, attend conferences, serve on panels, and publish papers on foreign policy and diplomacy for others in the community. We have called foreign policy and diplomacy the nation’s first line of defense, or as Walter Lippmann correctly called them, the “Shield of the Republic.” The mistake is that we preach to the choir.

At times, we must speak to the choir of course. But, in this situation, to continue the metaphor, when the parishioners are losing their beliefs and leaving pews empty, it is important to change course and proselytize. We need to speak to a different audience. One we have failed, heretofore, to address adequately. That audience is composed of the unbelievers, the skeptics, the uninformed, and the misinformed among the American public. Unfortunately, when it comes to diplomacy, that includes most Americans.  In this regard, we have been largely absent.

The message we have is an excellent one. The history and practice of American diplomacy is a success story. I have sometimes heard it said that American diplomats are not equal to the task, and that they get taken to the cleaners when they negotiate. That is nonsense.  When critics say that, they should be asked to explain how thirteen weak, squabbling, disunited colonies on the eastern shore of a wilderness continent in 1776 began an experiment in government, and 170 years later in 1946 became the first ever global superpower. One of the central reasons was skillful diplomacy, which created and took advantage of opportunities to expand and strengthen the nation.

Within the first 125 of those years when Teddy Roosevelt was president, we were recognized as one of the world’s major powers. We gained that recognition without a standing army—the only nation to become a major power without such an army. Thus, we had to rely more heavily on our diplomats to get to that milestone and to keep us there.  Our diplomats did not fail us. That success did not end in 1945 with superpower status; it continued.  The Cold War was first and foremost a diplomatic success. Yet today, Congress’s persistent and consistent message to the public is: military force counts; diplomacy is a waste of money.

To make a difference, those involved in international affairs should tell the story of American diplomacy to average Americans, especially our youth.  We explain U.S. policy and diplomacy to other nations with great skill.  We must do the same here at home.  Foreign affairs organizations need to cooperate in responding to this challenge.  They need to proselytize like missionaries to the unbelievers, not like bishops to their flocks.

Ambassador McNamara is Adjunct Professor at George Washington University’s Elliott School of International Affairs.   A career diplomat, he left government in 1998, but returned after 9/11 as Senior Advisor to the Secretary of State. He also served as Assistant Secretary of State; Ambassador to Colombia; Special Assistant to the President; and Ambassador for Counterterrorism.  He was President of the Americas Society, the Council of the Americas, and the Diplomacy Center Foundation.