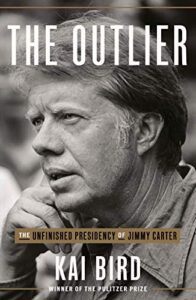 “Outlier” is a well-written and thoroughly-researched history of Jimmy Carter’s presidency.  Kai Bird’s theme is that Carter was not a failed president. His presidency was ultimately hijacked by the Iranian revolution, but his overall achievements, domestic and foreign, were consequential and set a high bar for future presidents.

Although Carter is remembered best for successes like the Panama Canal treaties, the Camp David peace accord, and the disaster of the Iran hostage crisis, Bird points out that Carter passed more domestic legislation in one term than other presidents in two.  He deregulated the airline and natural gas industries.  He pushed through consumer protection regulations such as seat belt and airbag requirements, and fuel economy standards. He passed comprehensive welfare reform.  He transformed the judiciary by appointing women and minorities to the bench in numbers never seen before. And he was tantalizingly close to health care reform similar to Obamacare before it was torpedoed by Ted Kennedy for not being sufficiently sweeping.

Carter’s political advisors nevertheless warned him periodically that he was spending too much time on foreign policy to the exclusion of domestic issues.   I will do much the same in this review.

One of Bird’s major themes is the ideological struggle between National Security Advisor Zbigniew Brzezinski and Secretary of State Cyrus Vance.   Bird puts his view up front: the appointment of Brzezinski “was the President’s first major mistake.”   Among many examples, he cites Brzezinski’s obsession with the Soviets and his consistently poor judgment on the Iran issue.

The Soviet invasion of Afghanistan played right into the Brzezinski-Vance dynamic in Bird’s telling.  Carter took Brzezinski’s more hawkish advice over Vance’s advocacy of diplomacy.   In his State of the Union address, Carter said the Soviet invasion could pose the most serious threat to world peace since the Second World War.  He boycotted the Olympics, imposed a grain embargo, and ramped up the covert action program to arm the insurgents.  He increased the defense budget and altered long-standing nuclear weapons strategy without consulting the State Department.

Bird outlines a conspiracy theory suggesting that the US supply of arms to the mujahideen earlier in 1979 may have been a deliberate trap to get the Soviets involved in an Afghan quagmire.  Bird says “some historians have argued” the aid was designed to lure in the Soviets, and “by one account,” after the Soviet invasion on December 25, 1976, Brzezinksi told his aide “they have taken the bait.”  That’s thin evidence for such a strategy.  Afghanistan was of course ultimately a disaster for the Soviet Union, as well as for Afghanistan itself.  But Bird approvingly quotes George Kennan arguing (against conventional wisdom) that the debacle actually delayed the breakup of the USSR.

The book’s discussion of Arab-Israeli issues is superb, informed in part by Bird’s previous biography of Robert Ames (The Good Spy) who had carried on a secret authorized dialogue with the PLO for years.

The day-by-day outline of the 13 days of talks at Camp David with Menachem Begin and Anwar Sadat includes detailed vignettes of the president’s dogged efforts to corral the two leaders.  Carter was disgusted by the stubbornness of Begin, who he concluded would prefer the summit to fail.  Begin wanted a simple peace treaty with Egypt while Sadat for his political future (and his life, Carter feared) had to deliver a Palestine agreement as well. Begin wouldn’t give any ground on dismantling settlements in the Sinai, much less the West Bank.   Finally Carter got him to agree to put the Sinai settlements to a decision by the Knesset.  Carter thought he had an agreement for a freeze on West Bank settlements as well,  but inexplicably neglected to get Begin’s signature on that particular side letter.   As a result, Carter felt betrayed by the Israeli leader.  By contrast, he developed a close friendship with Sadat who later called Carter his “very best friend and the most honorable man I know.”  Carter’s strong opposition to West Bank settlements lost him much of the Jewish vote in the 1980 election. He has never wavered in his view.

The Iran hostage crisis dominated the last year of Carter’s presidency but Bird starts the story earlier with a debate within the administration over how much support to offer the Shah in his final days in power.   Brzezinski typically, but wrong-headedly, saw Iran’s Communist party as the real threat to US interests, and consistently supported the idea of a military coup to replace the Shah with a pro-American regime.   When the Islamists came to power and demanded the return of the Shah and his fortune, Bird turns his attention to another political force represented by David Rockefeller of Chase Manhattan Bank, Henry Kissinger, and John McCloy, the subject of an earlier Bird biography The Chairman.  For both personal and financial reasons (Chase held much of the Shah’s overseas assets), they lobbied hard in favor of the Shah’s desire to settle in the US, finally overcoming Carter’s visceral objections by winning over Brzezinski and by exaggerating the Shah’s health concerns.

Once the embassy hostages were seized – as a reaction to the Shah’s admission to the US – Carter devoted himself to their safety and eventual release.  Bird says the botched rescue mission was a project hatched and promoted by Brzezinski.   It was Vance who resigned though and, lest we forget, Carter was commander in chief.  Bird reprises the tortuous negotiations between the US and Iran over the 444 days of captivity and asserts that Rockefeller and McCloy – the villains of this chapter – at one point were prolonging the hostages’ ordeal to get the best possible financial deal for Chase Bank and other creditors — and came out with a 3.7 billion dollar payout from the Iranian regime.

The negotiations Carter should have been concerned about were those apparently conducted by Reagan confidants who were worried about a pre-election release of the hostages.   We know some Reaganites tried to use Yasir Arafat as a go-between to reassure the Iranians they could get a better deal under a Reagan administration (years later, Arafat told Carter he had been approached and refused).  The more sensitive question with which Bird grapples is whether Reagan campaign manager (and later CIA Director) Bill Casey travelled to Madrid on July 26-27, 1979 to make a similar case to a representative of the Ayatollah.   A 1991-92 Congressional investigation concluded Casey had been in California not Spain on the crucial weekend.   But Bird disproves that piece of evidence and asserts that the Bush White House (Boyden Gray) had stonewalled the Congressional investigation and not turned over a diplomatic cable from Madrid reporting that Casey had been in town for purposes unknown (in his epilogue, Bird says he initiated his own FOIA request for this cable, to no avail).   It’s a complicated and partly-circumstantial story but Bird makes a good case, building on Gary Sick and others who have investigated this, that Casey negotiated a deal with Iran and got away with it.

Bird’s focus on the Middle East and Iran comes at the cost of other foreign policy issues.  Bird acknowledges the significance of normalization with China, but does not delve into it with the same verve with which he treats Mideast and Iran issues.  And he totally neglects the relationship with India; if nothing else, Carter changed the equation in South Asia by being the first senior US leader to visit India without balancing it with a visit to neighboring rival Pakistan.

Bird devotes several pages to the effort, spearheaded by Richard Holbrooke, to normalize relations with Vietnam.   But the Vietnamese invasion of Pol Pot’s Cambodia and the subsequent Chinese attack on Vietnam ultimately prompted Brzezinski (and Carter) to side with Beijing, delaying by decades reconciliation with Hanoi.

Bird sums up succinctly and well the post-presidency, especially the creation of the Carter Center devoted to conflict resolution around the world.  Bird acknowledges that Carter’s post-White House freedom to speak his mind and his consistent advocacy of the Palestinian cause and human rights around the world has made him a thorn in the side of subsequent presidents.   Carter called it “pariah diplomacy” and was unapologetic.  He became more strident on the Arab-Israeli issue after his presidency.  When he published “Palestine: Peace not Apartheid,” he was called an anti-Semite, which hurt him deeply but did not change his outlook.   He met Arafat in 1990 and embraced him as a peace-maker not a terrorist.  He opposed George W. Bush’s Iraq war after the invasion of Kuwait, calling instead for diplomacy.

Bill Clinton and his advisors were appalled when Carter in 1994 accepted an invitation from Kim Il Sung and then negotiated a deal with him for international inspections and a temporary freeze on plutonium production.   Clinton’s outrage notwithstanding, Bird points out that this breakthrough led to a governmental agreement later that year along the same lines, perhaps averting a war between the Koreas.

Carter’s presidency deserves this comprehensive re-evaluation.   Bird laments the continuing lack of access to many of the presidential diaries but he has done a fine job of tapping existing sources, including extensive interviews and oral histories, to bring new perspectives to the historical record.

Donald Camp is a retired Foreign Service Officer who divided his career between south and east Asia.   He was a Deputy Assistant Secretary in State Department’s South and Central Asia Bureau when Richard Holbrooke was named Special Representative for Afghanistan and Pakistan. He also was Senior Director for South Asia on the National Security Council staff during the early months of the Obama administration.  He is currently non-resident Senior Associate at the Center for Strategic and International Studies in Washington, D.C.