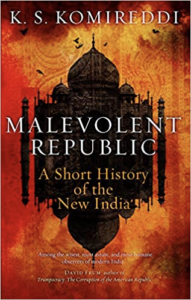 On July 10, President Biden appointed former Los Angeles Mayor Eric Garcetti to be the new US Ambassador to India.  Our embassy in Delhi is therefore dealing with a new presidential administration and a new Ambassador at the same time.  Foreign Service Officers assigned to our Indian diplomatic posts will be dealing with a country that is entirely new and different in many ways.  Malevolent Republic can provide some useful insight.

Malevolent Republic author K.S. Komireddi is what is termed loosely a “public intellectual.”  A journalist and commentator based in London, he is an old-school intellectual eminently well-read and conversant on many topics.  His favorite topic is India, the land of his birth.  In this, he resembles V.S. Naipaul, the author of “India – A Wounded Civilization.”   Both men are trying to come to terms with their Indian heritage and provide explanatory insight.

Komireddi’s thesis is that the India we see today is a dangerous historical anomaly, a recent phenomenon that bears little resemblance to that which came before.  This new India is, in his view, a betrayal of all India stands for.  Komireddi hypothesizes that this degenerative process started with the election of Narendra Modi as Prime Minister.  Komireddi further posits that if Modi’s rule is not extinguished soon, it will threaten the very existence of the Indian state.

In this, his first book, Komireddi has taken on a gargantuan task.  He hopes, in a relatively slim volume, to explain what has happened to India.  He does so in two parts.  In part one, Komireddi provides a succinct historical analysis.  In the book’s second part, Komireddi provides a damning portrayal of Modi. He systematically examines all the elements that make up the Indian state and makes the case that Modi has undermined and subverted all of them.

The two parts taken together paint a dire picture.  A nation founded with high ideals by talented and devoted leaders, has over the years, lost its way.  Komireddi argues that the Indian polity is so hollowed out and decayed and the hardening authoritarianism of Modi and his Hindu nationalist Bharatiya Janata Party (BJP) so well-entrenched and all-pervasive, that India will have an extremely difficult time avoiding a fall into the abyss.

In a brief coda, Komireddi asserts that Modi will not be defeated and replaced without an all-out mobilization of the Indian population.  This requires nothing less than a national reaffirmation of the country’s democratic and liberal ideals.  The liberal majority would have to put aside their political and cultural differences and commit to working together.

Komireddi was raised in a well-educated liberal household in what is now the Indian state of Andhra Pradesh.  Prior to independence, what is now Andhra Pradesh was divided into two distinct spheres.  The princely state of Hyderabad, ruled by the Muslim Nizam of Hyderabad, and territory ruled directly by British colonialists.  Like a true liberal, Komireddi urges his readers not to adopt simplistic thinking, but to see the world in shades of gray.  He points out that the Indian Nizam was a tyrant who made life a living hell for the inhabitants of his state, while the British practiced a form of benevolent dictatorship, providing modern education and infrastructural development.  Komireddi is a product of this education.  Studying first in elite English medium schools in his home state before being shipped off to London for a first class education there.

Andhra Pradesh epitomized India’s traditional “composite culture” in which Hindu and Muslim Indians lived side by side and shared a mutual respect and affection.  This intense interaction resulted in a cultural hybrid which integrated the best elements of both religious communities.  Komireddi asserts that this cultural multiplicity lies at the heart of India.  He makes a strong case for what Americans call “civic nationalism,” in which persons from anywhere in the world can share a common love for country that is not based on “blood and soil” but rather tolerance and shared values.

He contrasts this Indian polity with Pakistan, which he describes as “a complete negation of the very notion of human multiplicity.”  For Komireddi, Indian nationalism is inclusive.  He takes pride in the India that was, a state whose inhabitants proudly shared a common identity.  He contrasts this with the “exclusive nationalism” of Pakistan, a state where only its Muslims enjoy full citizenship while those of other faiths are reduced to second class status.

In Komireddi’s eyes, the danger posed by Modi is his project to replace inclusive citizenship with a repugnant exclusive model.  In Modi’s India, only its Hindu citizens enjoy full citizenship, while the “others” are excluded.  In the end, he asserts, “India will become Pakistan by another name,” and at that point India will cease to be.

In his examination of India’s history since independence, Komireddi attempts to discern what some Hindus find attractive in the siren’s song of Hindu nationalism.  He reverts to a psychological explanation.  India was conquered and colonized first by Muslim invaders from Central Asia and then by British invaders who arrived by sea.  Although they are the progenitors of one of the world’s great civilizations, Indian Hindus endured centuries of dominance by foreigners who often treated them and their culture with disdain.  Komireddi rightly asserts that this is a historical fact that all Indians must come to terms with.  However, a subset of Indian Hindus cannot come to terms and instead embrace “overcompensation.”  Ashamed at what they view as the Hindu “weakness” resulting in an inability to defend India, they attempt to demonstrate “strength” by embracing bigotry and aggressive prejudice against India’s religious minorities, most particularly Muslims and Christians, who they view as representatives of aggressive foreign cultures.

Komireddi presents the reader with a specific thesis.  He asserts that the India that he has known and loved is being eradicated by authoritarian, bigoted, and chauvinistic forces that nurse a strong love for fascism and a disdain for democracy.  He recognizes that it is a quandary.  How could so many Indian voters reject their country’s basic values and embrace a despot intent on destroying those values?

Komireddi does a good job of explaining how it happened.  He makes it clear that there is plenty of blame to go around.  Modi and the BJP did not emerge out of nowhere.  They were on the fringes of the Indian polity for decades before they found their opening.  It was India’s Congress Party that provided that opening.  Like the Indian author Arundhati Roy, Komireddi has no love for Congress.  He asserts that Congress won independence for the Indian people, presented them with a unique set of values and an admirable constitution, but then fell into a morass of corruption and dynastic politics that hollowed-out the state and made it easy pickings for Modi and the BJP.  By the end, average Indians were so tired of Congress misrule that they willingly took a leap of faith and voted for Modi.

This book is an invaluable primer for anyone trying to comprehend the “new India.”

If the book has a shortcoming it is Komireddi’s insertion of obscure vocabulary throughout the book; few persons can understand the words without a dictionary.  He would have been better off if he had put down his thesaurus and relied on words any educated reader could understand.