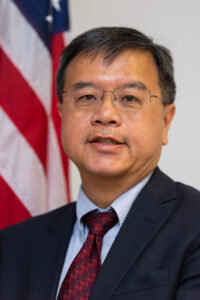 Ed Loo is currently a network engagement specialist at the State Department’s Global Engagement Center. Previously, he worked in the State Department Political-Military Bureau’s Directorate of Defense Trade Controls as a regional affairs analyst in the Office of Country and End User Analysis from August 2020. He served as an inspector with the State Department’s Office of the Inspector General from August 2018 until August 2020. Prior to that, Ed was an active duty Foreign Service Officer, concluding his last assignment as the director of the Office of English Language Programs in July 2017. His previous assignments included serving as Deputy Chief of Mission in Budapest, Hungary from 2015 to 2016, and as the U.S. Department of State’s Diplomat in Residence for South Florida and Puerto Rico from August 2012 through 2015.
Ed served in the public diplomacy career track for 30 years. He was a Career Member of the Senior Foreign Service Officer with the rank of Counselor. In addition to Washington and Budapest, he also served in Bogota, Colombia; Madrid, Spain; Managua, Nicaragua; Taipei, Taiwan; Manila, Philippines; and Beijing, China. He speaks Spanish, Chinese Mandarin, and Chinese Cantonese.
After retiring from the State Department in 2017 and before joining the Office of the Inspector General, Ed was a consultant to the Philippine-American Educational Foundation (Fulbright Commission) in Manila, Philippines and acted as the interim executive director for the Malaysian-American Commission on Educational Exchange (Fulbright Commission) in Kuala Lumpur, Malaysia.
He earned a master’s degree in American history from Columbia University, and bachelor’s degrees in history and English from Dartmouth College. He is from San Francisco, California.