Trinidad and Tobago when I served at Embassy Port of Spain (1977-1980) was a pleasant Caribbean backwater. U.S. interests were minimal—major American companies there, Amoco and Texaco, were well able to look after their own interests. Forty years later, the economy remains heavily dependent on the energy sector. 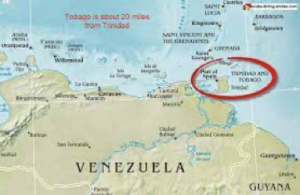 The Consular Section, with six officers, was by far the embassy’s largest and busiest. I handled the political reporting on the opposition parties and contacts with the local trade unions, while a colleague was responsible for economic/commercial matters. The Ambassador and Deputy Chief of Mission dealt with the higher levels of the Government of Trinidad and Tobago (GOTT), but in fact their interactions were fairly limited.

Trinidad’s brilliant but quirky Prime Minister, Eric Williams, declined virtually all direct contact with American officials. During my time there the highest-ranking State Department official to visit was Assistant Secretary Terrance Todman, a personal friend of the Ambassador; we were not blessed with even one Congressional visit.

Officially I was the embassy’s Political/Labor Officer. I was told that that somewhat unusual title was a holdover from colonial days, when the U.S. was represented by a Consulate General. Since in theory at least there was no independent political life in the colony, it would have been inappropriate for a Consulate General to have a Political Officer. However, there was a Labor Attache, who followed trade union affairs and presumably did some reporting on internal political maneuvering as well. That is why I was known among many of my trade union contacts as the Labor Attache, although the bulk of my work was more strictly political.

Among my professional contacts was Basdeo Panday. Leader of the Opposition in Parliament and chairman of the United Labor Front (ULF), the main opposition party. His party was social democratic in orientation. He also headed the All-Trinidad Sugar and General Workers’ Trade Union. Like Panday himself, both of these organizations were comprised almost exclusively of ethnic East Indians. At that time, Indo-Trinidadian and Tobagonians, primarily the descendants of indentured workers from India, made up 40.3% of the population, slightly below the percentage of those of African origin. Today those of Indian descent are the country’s largest ethnic group—approximately 35.4% vs 34.2% of African origin.

The ULF and the union were the major Trinidadian organizations promoting the political, economic, and social interests of the ethnic Indians. Panday himself was to have a long and varied political career, including, as the country’s first Indo-Trinidadian Prime Minister in addition to serving at various times as Foreign Minister, Minister of National Security, Senator, Member of Parliament and Leader of the Opposition (four times).

Educated in Trinidad and the United Kingdom, Panday was an intelligent, friendly, and agreeable person whom I always enjoyed chatting with. No doubt noticing that my knowledge of his country was neither broad nor deep, he offered to take me on an “orientation tour” in southern Trinidad, where most of his ULF constituents and union members lived. I was pleased to accept, and not long thereafter we headed south in his car.

What I remember most about our daylong outing was our extended conversations, during which he explained the ethnic Indian perspective and the challenges he and his fellow Indians faced in Trinidad. The predominantly Hindu Indian community also included Muslims and some Christians, adding to the complexity of the situation. There were those who considered Panday to be a socialist or even a communist, so I asked him about the role of Marxism in his country. He responded that, in his view, Marxism was a “cold-climate philosophy” which could never take root in a place like Trinidad. (I guess he would have considered Cuba to be the exception that proves the rule.) In his country, he said, no one ever starved or froze to death, prerequisites for Marxism to succeed. Under such circumstances neither Marxism nor communism could ever take hold there.

As we drove through various rural hamlets and villages, Panday would stop the car at one modest home after another and speak with the inhabitants. Trinidad was a small place, and he clearly knew his constituents personally, and they him. He was always received warmly and listened carefully and sympathetically to the predictable concerns about pay, education for the children, and other social issues. It was retail politics at its most basic and helped me to understand how he had gained a leadership role within his community.

As we headed back to Port of Spain, we approached the large Caroni Swamp National Park, which is famous as a wildlife sanctuary and the home of Trinidad’s national bird, the scarlet ibis.

When I queried Panday as to whether there were hunters in Trinidad, he replied affirmatively. What animals did they hunt, I asked? Mostly birds, he responded. And in which areas of the country did such hunting take place? I was taken aback when he answered “the Caroni Swamp bird sanctuary,” since, he explained, that is where the birds were. Noting my surprise, he smiled and patted me gently on the arm, saying that there was much I needed to learn about life in Trinidad. When I subsequently asked other Trinidadians about alleged bird poaching in the Caroni Swamp, I never learned anything further. However, National Geographic reports poaching of the bird for bush meat is a continued concern.

At some point I mentioned to Panday that as a child I had read stories about people in tropical areas sucking on pieces of raw sugar cane in lieu of candy. I was curious to know what it was like. Thereafter, every time he or someone from the sugar workers union came to our house, they always brought a tasty bit of sugar cane for me. It never disappointed—a small but welcome bonus stemming from my duties as Labor Officer at the Embassy and one that still brings a smile to my face when I recall my three years in Trinidad.