Colin Powell touched our national life and our personal lives in more ways than we realized during his time with us. His passing has brought into sharp focus the difference between the America he believed in and the America we face today. The son of immigrants, his drive to overcome, his respect for all who labor, his belief in the power of the community, and his ability to see what mattered all made him who he was and made us believe in what he believed.

The odd thing was that we all thought that world was not only the normal world but also the world that would remain normal—because we lived in America, because we were Americans, because we believed we had a national destiny that was still unfulfilled, that our country was a force for good on the planet and that Americans would always strive to keep it so. The legacy first framed by our Founding Fathers and brought into being over succeeding generations was the vision we inhabited and believed. 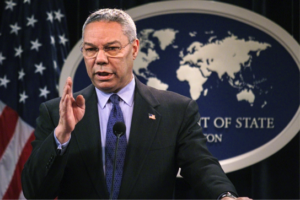 If he could speak to us now, a generation after the end of the Cold War and in the midst of an entirely new history, I think he would remind us of two enduring principles. First, he would tell us that our current domestic hubris and the unwillingness to find common space in our national life and purpose endanger us at home and abroad. Second, he would advise us to use our power to manage global issues through diplomacy more frequently now in multilateral settings. He would say that leading with more modesty and more skill within a community of common interests and values should be our forward-looking contribution to global stability and progress.

He was a Black American in a white America. He faced the dilemma that W.E.B. Du Bois first described as being Black and American at the same time. Powell became one of the most popular Americans and one of the most popular Black Americans by embracing the values of traditional American patriotism and by demonstrating that a Black American could have those convictions. He never sought special privileges or treatment for being Black, yet he was a strong supporter of affirmative action and praised its successes in transforming the American armed forces.

As General Powell and later as Secretary of State Powell, he was cautious about the use of military power. He had served two tours in Vietnam. He knew that military force has its limits and that military victories do not ensure peace. He created a set of standards for the use of military power that we forgot—to have achievable objectives, to plan an exit strategy, not to waste the lives of our young women and men for national glory or pride. He knew the Iraq War was unnecessary, but he also knew the power of loyalty, and he knew that his influence as Secretary of State depended on his being on the team. That took him too far once, and he was the kind of man whose honesty and integrity allowed him to say so rather than defend his reputation with prevarications. Rather than talk about his mistake, we might rather talk about his courage to come back to the truth.

He knew the power of the long, steady and unromantic game of diplomacy to preserve and foster national power and values. He understood as a young child coming to America, growing up in America and becoming a military officer that we could not live and prosper alone in a complicated world. He knew that it was diplomatic power, not military power, that in the long game would make it possible for the world to grow ever closer together and for America to be a leader in the process.

He did not claim to be an intellectual framing a “better way” for America. The parallels between his life and that of Dwight Eisenhower are remarkable. Both were mediocre students, both rejected the strict discipline of academic and military life. Both focused on the people with whom they worked and the institutions within which they worked, and both gained the trust and admiration of Americans across the full spectrum of politics. Both made mistakes in life as they ascended the ladder of power, and both preferred gradual progress over drama. Both recognized the limits of military power: Eisenhower warned against the military-industrial state, and Powell cautioned us about careless use of military force.

He remained true in retirement to the values of a broader more inclusive community as his reputation elevated him to stardom in America’s cultural life.  He continued to pour his energy into the strength of America’s belief in its better self to achieving a more peaceful world and strong nation. We all know his many appearances giving speeches around the country, hosting holiday programs, support for America’s Promise Alliance, the Boys and Girls Club and many many others. Never too proud to be one of us, never unwilling to help where help was needed, never concerned about who he really was.

The national outpouring of emotion over the loss of Colin Powell from our national life allows us to see more clearly how our country veered to the dark side. No country or community ever grows stronger with deep civil divisions. Diplomacy on the other hand is all about getting to a shared space that opens the pathway to yet more progress. That was Colin Powell’s story—personally and professionally. He understood that to make headway requires creativity, patience and persistence. His death shows us the way forward to fashion a shared purpose and build a greater good. Let’s make his example our guide for tomorrow in American diplomacy and American life.

Ambassador (ret) Pearson is the President of American Diplomacy Publishers, former Director General of the U.S. Foreign Service, and former U.S. Ambassador to Turkey. He first met Colin Powel when Powell was the military assistant to Secretary of Defense Caspar Weinberger, then worked for him at the National Security Council and later at the State Department.