Home / Eyewitness / Where in the World Is Barbados?

By Jonathan B. Rickert

It long has been a practice in the United States for presidents to name supporters, friends, and others from outside the diplomatic service as chiefs of mission abroad.  In an effort to ensure the professional qualifications of those filling such posts, the Foreign Service Act of 1980 (Section 304) stipulated that those receiving such positions be professionally qualified, knowledgeable about all major aspects of their countries of assignment, and, to the extent practicable, have some competence in the local language. Campaign contributions should not be a factor in such appointments, which “should normally be accorded to career members of the Service.”

Over the years, however, presidents of both parties have largely observed the law in the breach.  And while the percentage of “political” ambassadorial appointments usually has hovered around 30 percent in recent years (except under Donald Trump, 44 percent of whose appointees were political), those postings overwhelmingly have been in Europe and other places that were relatively developed, comfortable, and safe, leaving career diplomats to head missions elsewhere, including most in the Third World.

When Ronald Reagan became president, someone told him, so the story goes, that U.S. ambassadors were his personal representatives abroad and suggested that he might want to inform his appointees personally of their nomination. Whatever the truth of the foregoing, Reagan did make it a practice to telephone each newly nominated ambassador with the news. This came to be known as “the call,” something that was eagerly awaited by those, both career and non-career, who were expecting chief of mission posts.

Sometimes nominees, particularly political appointees, knew only that they were under consideration but not the specific embassy, adding an element of uncertainty and anticipation to the process. Whenever practicable, the president also hosted his confirmed envoys at the White House for a grip and grin session before they headed out on their new assignments. Those meetings resulted in autographed photos of the president with the new envoy, which the recipient would proudly display as evidence of his or her association with him.

One of Reagan’s nominees was Milan Bish, an outgoing, gregarious Nebraska businessman, a shopping mall magnate who had performed useful (presumably fund-raising) services for the Republican Party. He understood that his reward would be an embassy, albeit a relatively minor one, but he did not know where he might end up ensconced as ambassador.

Before heading out to post in 1981, Bish related to me and others working in the Office of Caribbean Affairs (ARA/CAR) that he was at home awaiting word when the White House called. The president came on the line and, after some preliminary small talk, asked if he would agree to become ambassador to Barbados.

Bish accepted immediately. Then, as soon as he had put down the receiver, he told us, he ran to get an atlas to see where and what Barbados was -– he had heard the name before but knew zero about the country. It is unclear whether or not he realized at the time that he would also be accredited to the eastern Caribbean mini-states of Antigua, Dominica, St. Kitts and Nevis, St. Lucia, and St. Vincent. Bish thought this was a great story, and we all laughed heartily. We suggested to him, however, that he save it for friends at home, such as those at the Grand Island, Nebraska Rotary Club, rather than sharing it with people whom he would be meeting in Barbados, who might find it considerably less amusing. 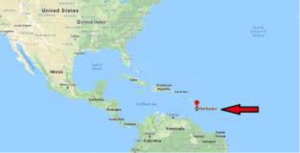 Many of the non-career ambassadors appointed during my time in the Foreign Service, Bish among them, were successful and accomplished in their own professions and fields. Others were not. Most, however, knew little, if anything, about diplomacy or about the countries to which they were being assigned. While I was a country desk officer in the same office, I recall helping to prepare one such envoy prior to his Senate confirmation hearing. His first question to me was “Jonathan, just what does an Ambassador do?” Enough said. Although the majority of presidents pay at least lip service to the requirement to appoint competent Foreign Service professionals to chief of mission positions, the reality is that most of the “best” and most important posts continue to go to non-career appointees.  That was as true in President Reagan’s time as it is in President Biden’s.

It is often argued, with some justification, that political appointees may boast personal ties to the president and/or special competencies not found among members of the career service.  Nevertheless, many non-career appointees doubtless bring little, if any, of the “clearly demonstrated competence” and “knowledge and understanding of the history, the culture, the economic and political institutions, and the interests of that country and its people” called for in the Act.  Such definitely was the case with the two Reagan appointees mentioned above.