Home / Commentary / The Ambassadors:  Thinking About Diplomacy from Machiavelli to Modern Times

The Ambassadors:  Thinking About Diplomacy from Machiavelli to Modern Times 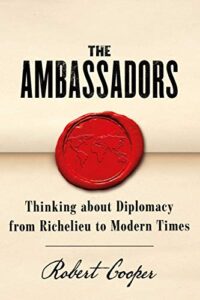 Analysis and synthesis, Goethe liked to say, should be alternated as naturally as breathing in and breathing out.  Such breathing is natural; such thinking uncommon.  Robert Cooper, practitioner and scholar of diplomacy, has managed it with ease and effect in his new book, a fine successor and kindred spirit to his earlier The Breaking of Nations.

His new work misleads in the main title, The Ambassadors, but erects a better guidepost in the subtitle, Thinking About Diplomacy from Machiavelli to Modern Times.  The book examines two dozen diplomats in the course of its survey of 500 years; but it is no systematic overview.  From prime ministers to vice consuls, its protagonists embody diplomacy of all ranks and functions.  Very few carry the official title of ambassador.  One who does, George Kennan, flopped twice as ambassador.  His greatness lies elsewhere.

Cooper is a former British diplomat.  He served in senior positions with the EU, including as the director general for external and politico-military affairs.  I had the chance to work with him in Kosovo during that country’s drive to independence and consolidation of statehood, 2007-2010.  The personality I came to know is the same one on display in the book, an impression best conveyed by Cooper’s own reflections on Machiavelli in the opening chapter:  “Niccolo is a good diplomat:  he is interesting to talk to; he listens carefully, writes well, thinks ahead.”

Cooper is coy about what his thinking yields; also misleading.  He claims his work consists of “fragments.”  Dean Acheson used that word as well for a collection of essays (Fragments of my Fleece) and what gave it coherence is the same thing as with Cooper:  a strong personal imprint.  Three imprints in fact, as follows.

Style of narrative:  Note that Cooper uses the present tense in describing Machiavelli above, an unusual technique sustained through all 500 pages.  It’s his way of engaging the reader in the drama of his protagonists as they use their wits to confront their dilemmas, as they struggle through the tangle of domestic politics and the labyrinth of international relations.  Negotiations become navigations.  Careers become odysseys.  The present tense evokes the impact of personality, the sway of intangibles, and the twists of contingency.  You are there.

Diplomacy, in Cooper’s view, is high-stakes drama.  An admirer of Shakespeare, he approaches it as a playwright would.  Or a screenwriter.  For example, here’s how he sets the scene for Kennan’s epoch-making Long Telegram, the embryo of the U.S. policy on containment:  “February, 1946.  Moscow.  George Kennan is sick in bed . . . His ambassador is away and he is in charge.”  Alas, Philip Seymour Hoffmann is no longer available for casting.   Elsewhere, in discussing Nixon and Kissinger, Cooper regrets that Harold Pinter never wrote a screenplay about the duo with the charged theme of “two men sacrificing all for power, including power over each other.”  What a piquant prospect – Pinter!

Cooper’s narrative is also enlivened by the way he reaches a conclusion.  He turns to short sentences.  He declares.  His judgments have the force of verdicts.  For instance, he makes the point that diplomats in multilateral settings can exercise influence by their professional skill and personal standing even if they represent small nations.  This is actually a conventional observation, one borne out many times by my six-year experience in multinational organizations, but Cooper’s conclusion adds luster:  “That is a mark of civilisation.”

Selection of material:  The book is no global survey.  It swims mostly in the trans-Atlantic sea.  It picks individuals and episodes according to a marvelously idiosyncratic process.  Bismarck, for example, does not make the cut.  A footnote explains that Cooper doesn’t like him and can add little beyond Kissinger’s interpretation.  That said, the chapter on modern German diplomacy is a gem.  It looks at Adenauer, Brandt and Kohl as joint architects employed in the same project that culminated in 1990 with German unification, each one a brilliant diplomat in his own way.   Using Cooper’s ideas, I would sum up that history in a Hegelian framework:  Adenauer supplied the thesis – anchoring his country in the West; Brandt added the antithesis – stabilizing relations to the East; and Kohl achieved the synthesis – a fusion of the two Germanys in a reconciled Europe.  Brandt gets Cooper’s special acclaim.  Although he doesn’t mention Angela Merkel, who served as Chancellor a few years longer than Adenauer and nearly as long as Kohl (16+), we can take from his chapter a solution to the puzzle why commentators have been hard pressed to sum up her legacy:  The Hegelian statecraft was complete.

For American readers, Cooper provides a public service in several ways.  He elevates Ernest Bevin, the British Foreign Secretary in the crucial years after World War II, to the same rank as George Marshall and Dean Acheson.  He makes all three “Olympians.”  Further, especially for this reviewer, he rescues from obscurity Juho Kusti Paasikivi, the Finn who, including as ambassador in Moscow, faced the leviathan of Stalin on his border in the dark years of the 1930s and 1940s.  Paasikivi, in Cooper’s telling, was astute in dealing with the raw power disparity.  It is a story of tragedy, though not only.  It fits nicely in the chapter on Finland and Denmark, which survived through diplomacy and then flourished.

And what can Americans take from the chapters on Kennan and Kissinger, especially in light of recent biographical studies?  The facts are documented and yet the material is endlessly rich, allowing Cooper a fresh interpretation.  After all, each was a complicated individual; embodied a unique diplomatic panache; and had failures and flaws.  Good material for a thoughtful diplomatic historian (or screenwriter).  In the case of Kennan, it is still useful to reflect on his understanding of the relation of political energy to military power vis-à-vis Moscow, “of winning without fighting, more Sun Tzu than Clausewitz,” Cooper writes.  As for Kissinger, it is always fascinating to return to his opening to China, a major historic event comparable to the French Revolution, since, Cooper argues, “almost half a century later, the consequences are still working themselves out.”

Sympathy with protagonists:  Admiration for one’s subject can cloud judgment in a study.  Or enable insight.  The latter is true of The Ambassadors.  The quality is akin to empathy for effectiveness of a diplomat, the ability to understand one’s foreign counterpart – the pressures, constraints, ambitions and obsessions, the whole volatile compound.  Here the diplomat and scholar Cooper come together.

After all, he picks people he likes (sorry, Otto).  He tells us when he approves of a book – for example, Machiavelli’s The Prince or Kennan’s memoirs.  This refreshed me, for I had read Kennan’s book at the start, middle and end of my Foreign Service career and was increasingly distressed by George’s neurosis.  Cooper also hails an early Kissinger study, A World Restored.  This seems to be trending.  Consider the new book by Martin Indyk on Kissinger and the Middle East, The Master of the Game, which takes its theme from Kissinger’s subtitle to his 1957 volume, “the problem of peace.”

Cooper does not hesitate to call some of his protagonists “heroes.”  He lauds “the practical imagination” of Jean Monnet, which invites a comparison with the author himself.  He renders generous judgment on those diplomats who defied their instructions, who used their moral wits and unrivalled knowledge of local conditions to embark on a career-risking course of action.  He has a historian’s sense of irony, knowing that diplomatic “success” can later turn to ashes, and “failure” to a belated step forward.  History is not linear.  Its contours may not always be sharp, but its story is never dull.

Those interested in diplomacy will read this book with pleasure and profit.  And indulge its idiosyncrasies.  Cooper’s analytical skill lies in reconstructing complex chains of events; his synthetic talent, in making sense of it all.  The latter was pronounced in his earlier work, Breaking.  Here he adds analysis.  His is an intellectual apparatus operating as smoothly as a respiratory system.

At the same time, we do not have to accept his curious disavowal of lessons learned.  Readers crave lessons; aspiring diplomats can learn from them; old hands can quibble with them.  Cooper calls them “maxims.”  One is particularly powerful – and painful.  It comes from Robert McNamara and his reflections on Vietnam written in 1995.  It is a searing indictment as we ponder the calamity in Afghanistan.  It sums up a lot of Cooper’s own thinking, which is why he cites it in both his books.  Most important, it underscores the inestimable value of diplomats in the field:

“We underestimated the power of nationalism to motivate a people (in this case, the North Vietnamese and Vietcong) to fight and die for their beliefs and values – and we continue to do so today in many parts of the world.  Our misjudgments of friend and foe alike reflected our profound ignorance of the history, culture, and politics of the people in the area, and the personalities and habits of their leaders.” 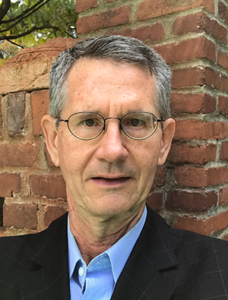 During his Foreign Service career, Fletcher Burton served as a nation-builder in Bosnia and Herzegovina, Kosovo, Afghanistan and Iraq.  His review of the Kissinger biography by Professor Thomas Schwartz appeared last year in American Diplomacy.