Twenty years ago, the United States Information Agency (USIA) was consolidated into the United States Department of State. On this 20th anniversary of that event, it is time to reexamine the wisdom of that decision. In my opinion, it was a mistake.

To win the Cold War, President Ronald Reagan did something for which he is never credited: he dramatically increased the budget of the United States Information Agency, the public diplomacy arm of our struggle against communism.

The Cold War was won not by our military strength but by the power of ideas, and USIA was the lead Cold Warrior in the Soviet/U.S. clash of ideologies.  The Soviet Union collapsed because its people lost faith in communism.  We won because we had better ideas, and because our values of free expression and personal liberty, among others, converted world opinion.  USIA was the little federal agency that played a major role in making that happen.

When the Cold War ended, some said that the United States no longer needed USIA to defend our values and to counter Russian disinformation, and the agency was abolished. Many of its functions were absorbed into the State Department.

Today we face ISIS, a new enemy, and Russia, a revitalized old one.  Our problem is that we treat the conflict with ISIS as a military struggle instead of an ideological one, while the Russians are humiliating us, not with their military might, but through hacking and social media. As we see in Afghanistan, the Taliban has risen from its ashes and is again a threat to the government in Kabul, and the continuing bloody attacks in Europe and elsewhere by ISIS show the resilience of the appeal of its ideology.  Regarding Russia, never has a country so humiliated us at so little cost by leveraging tools that should be our strength, not theirs.  In the effort to win the social media struggle, we are coming in last. Recent events in Syria have taken a dramatic turn, to the benefit of Russia, Iran, Assad and, last but not least, ISIS. It appears that thousands of ISIS fighters are escaping or being released from their former prisons in Kurdish controlled areas. Russia and ISIS have become stronger, and today they present a bigger menace than ever to America, Europe and to the region.  We will not defeat them until we have discredited their ideological allure.

Winning this war of ideologies ought to be a cakewalk.  We have freedom of expression, freedom of worship, education, tolerance, prosperity and the prospect of peace.  On their side is the ruthless suppression of human rights, the brutalization of women, intolerance of other views, poverty, endless war that is doomed to failure in the long run and an ideology of hate and division.

The State Department is seldom credited with how much it has done to project American power and to keep us safe.  It is staffed with some of the best and brightest our country has to offer.  It is excellent at government-to-government negotiations, creating treaties and promoting American business interests.  What it is not good at is people-to-people diplomacy.  It is not a part of the corporate culture of the Department and is essentially alien to its methods of operation, which primarily involve closed-door negotiations and press conferences. All too often, press conferences are what leaders in the Department think is public diplomacy.

Public diplomacy is about establishing relationships between foreign audiences and Americans.  Often, it has little to do with directly advocating foreign policy goals and is more about creating common ground even when we disagree with others about specific issues.  It is about developing alliances and partnerships with foreign publics and their opinion leaders. 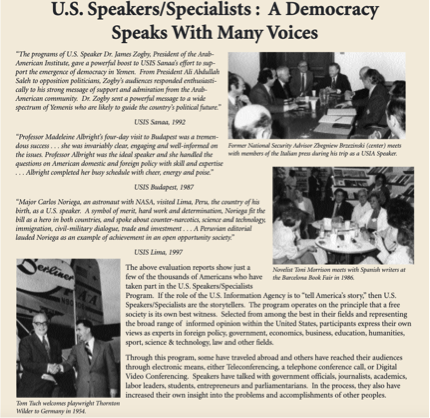 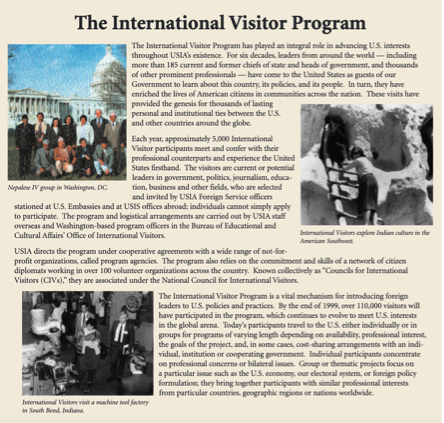 Two of USIA’s public diplomacy programs, from “USIA: A Commemoration”

It is also about nurturing democratic development through support for the evolution of institutions that underpin the rule of law.  Democracy is a fragile form of government, as our Founding Fathers understood. In 1860, the democratic election of Abraham Lincoln sparked a war that killed over 625,000 Americans.  That is the level of violence elections all too often ignite, and did, even in our own country.

Without the proper social, cultural and institutional foundations, elections are a prescription for violent upheaval, a lesson we have failed to learn.

In September of 1999 I went to Senegal in West Africa, where I was the Public Affairs Officer at our embassy in Dakar.  Senegal was remarkable for its activist media, especially in the developing world.

Senegal did not always have independent print and radio organizations. They exist today, at least in part, due to the work of USIA public affairs officers over two decades.  Early on, they recognized the potential for media liberalization in Senegal and began to send journalists, editors and government officials on short and long term journalism study tours in the U.S.  They brought media and democratization experts to Senegal to give lectures and hold conferences.  Brick by brick, year by year, they planned and worked to build a new media environment in Senegal, believing that an independent media, one that could hold the government accountable, was a key leverage point to creating the means to achieve democratic reform.

Senegal, in September of 1999, was about to hold a presidential election.  Because of USIA’s long history of promoting journalism in Senegal, the embassy decided to work in partnership with the local Print, Radio and Television Journalists Federation to hold a series of workshops on the role of journalists in covering elections.  The most popular lecture during the conference concerned the use of new technologies, with a focus on how cell phones could be used to provide breaking news. The journalists used what they learned.  In one instance, a radio reporter found a politician from the ruling party openly buying votes.  He called his radio station and they put him on the air, live.  He walked straight up to the man, identified him, asked him what he was doing and shoved the cell phone in his face.  The man stuttered a few words, and then turned and ran from the scene, to the laughter of all.

It caught on.  Reporters everywhere went looking for cases of voter fraud to expose.  On election night, the results were sent to a central vote collection office in Dakar, where the government supposedly would confirm the tallies before announcing them.  But when the polls closed, reporters started announcing the totals live on the radio, precinct by precinct. People kept their own tallies on scraps of paper and, by the next morning, everyone knew who the winner was. For the first time in the history of the country, it was not the incumbent, and everyone knew it no matter what the government claimed.

USIA was uniquely organized to promote democratic development through the long term support of human rights organizations, journalism, programs that helped build the rule of law, educational programs that encouraged the acceptance of diversity in society and, perhaps most importantly, through partnering with and supporting local opinion leaders to help them promote democratic values that stand in opposition to ideologies hostile to the West.  USIA worked over decades to set the foundations that must be established before democracy can flourish.

This was public diplomacy as USIA practiced it.  We need this approach and we need these tools back again if we are to defeat the ideology of ISIS, counter Russian disinformation and build democracies without igniting violence. It is time to bring back the United States Information Agency.

Christopher Datta is a retired Foreign Service Officer who began his career in the United States Information Agency and is the author of a memoir, Guardians of the Grail: A Life of Diplomacy on the Edge.