Diplomacy, to my mind, is a thoughtful, patient, and long-term approach to international relations, a constant building of relationships, leading eventually and hopefully to trust, cooperation and mutual benefit.   It is not merely a negotiation, no matter how successful. Without the foundation of the relationship, you might “win” once, but not so easily the second and third time. In my more than 25 years in the State Department, I worked with many statesmen and diplomats who understood this, and some who did not.

Ambassador Jack Matlock, for whom I had the privilege of working in Moscow 1990-1991, saw clearly that mere tough talk was generally not the best recipe for successful conclusions. Those heady days of perestroika offered a chance to set the relationship with the Soviet Union and then Russia on a new footing. As a new officer, I witnessed how respect and interest shown for the country to which you are accredited is anything but naïve; rather, it serves as the underpinning of the sensitive work of diplomacy and achievement of U.S. goals. This approach takes on added significance when one country is a super-power and the other is struggling.

The newly established Duke University archives of Ambassador Jack and Rebecca Matlock’s papers now give researchers and practitioners a direct window on this kind of diplomacy, practiced during a career that spanned 35 years, including a pivotal time of U.S. relations with the Soviet Union.   The papers, for example, include Matlock’s revealing notes of the candid and far-reaching discussions between Secretaries of State Shultz and Baker, counterparts Anatoly Dobrynin and Eduard Shevardnadze, Presidents Reagan and H.W. Bush, and Mikhail Gorbachev.

Sara Seten Berghausen, Associate Curator of Collections at Duke, introduces this treasure trove of information and how it can be accessed.

In February, Duke University Libraries celebrated the opening of the Jack and Rebecca Matlock Papers, an extensive record of a long and distinguished career in the U.S. Foreign Service. Materials in the collection, carefully saved through the decades by the Matlocks, and now preserved and made available at the David M. Rubenstein Rare Book & Manuscript Library at Duke, document the life and work of the Matlocks from the 1930s through the present day. Both Jack and Rebecca are Duke alumni; they met as undergraduates and married in 1949.

The opening of the papers culminates a multi-year residence and archival project supported by Duke’s Center for Slavic, Eurasian and East European Studies under the direction of Professor Edna Andrews, and funded in part by a grant from Carnegie Corporation of New York. While in residence at Duke, Ambassador Matlock has taught courses, lectured, and written numerous articles, drawing connections between his historical experience and current US-Russian relations. As part of the project he has collaborated with Rubenstein Library staff to organize and then donate to the library his papers, diaries and calendars, photographs, and audiovisual materials. At the Library, materials have been processed and rehoused in archival-quality folders and boxes. Hundreds of video and audio recordings have been digitized according to preservation standards.

Jack F. Matlock entered the Foreign Service in 1956 and served in Vienna, Accra, Dar es Salaam, and Zanzibar. But he is perhaps best known for his work in the Soviet Union and Eastern Europe, and as an advisor on those regions. He served as Ambassador to Czechoslovakia from 1981-83 and as Ambassador to the Soviet Union from 1987 until his retirement from the State Department in 1991. During this period he was a close advisor to President Reagan, serving on the NSC as Special Assistant to the President for Security Affairs and Senior Director of European and Soviet Affairs, and helped to direct negotiations on nuclear and space-based weapons. The Matlock papers are particularly rich in materials from this period of the Cold War, and demonstrate Matlock’s brand of diplomacy—one of extended efforts toward relationship-building and mutual respect. The papers also contain research notes and drafts for Matlock’s published work on this period, including Autopsy on an Empire: The American Ambassador’s Account of the Collapse of the Soviet Union; and Reagan and Gorbachev: How the Cold War Ended.

Interwoven throughout the collection are materials documenting Rebecca Matlock’s work as a photographer and writer, and her many contributions as an unofficial—and unpaid—diplomatic spouse. The Rebecca B. Matlock Photographs (https://library.duke.edu/rubenstein/findingaids/matlockrebecca/) form a separate collection, and offer images of the former Soviet Union that few Westerners had the opportunity to see. The photographs include landscapes, cultural and religious sites, and portraits; many are of politicians, government staff and military officers, but others focus on artists or other important cultural figures, including nuclear physicist and activist Andrei Sakharov and American opera conductor Sarah Caldwell. The larger Matlock papers archive also includes Rebecca’s writings—from class notes she took as an undergraduate at Duke, to drafts of her memoir, At Spaso House, to an extensive file of her “Dear Everybody” letters, which chronicle the daily life of the Matlocks and their five children. Her account of childbirth and recovery in a Soviet maternity ward represents a unique perspective on Soviet culture and attitudes toward women and family at that time.

In addition to the rich trove of materials relating to diplomacy, the collection contains teaching and research files from Ambassador Matlock’s role on the faculty at Princeton, Columbia, Mt. Holyoke College and Hamilton College, and as a speaker in demand on campuses across the country. Other series contain research notes and drafts of writings, documentation of events, and personal papers and photographs. There are also extensive audio-visual materials—an exciting collection of recordings available nowhere else—including readings by prominent American and Soviet poets hosted by the Matlocks at Spaso House (the U.S. Ambassador’s residence in Moscow), interviews of Ambassador Matlock in English and Russian, press briefings and speeches, and video recorded from Soviet television of the Congress of People’s Deputies and Supreme Soviet when those sessions were televised in the USSR for the first time during the late 1980s.

While the Jack and Rebecca Matlock Papers are certainly of interest to Cold War and Russian historians and to foreign policy scholars, they offer rich research possibilities across the disciplines , including literature, anthropology, cultural studies, and women’s studies. Students, faculty, scholars and the general public are invited to explore this voluminous record of a 20th century diplomatic life. Information about visiting the library, registering as a researcher and requesting materials may be found here (https://library.duke.edu/rubenstein/about/visit) ; visitors are encourage to contact Rubenstein Research Services in advance of their trip so that materials can be made ready in the reading room. With support from Carnegie Foundation of New York, Short-Term Fellows in Residence grants are available for scholars to work with the collections at Duke during summer 2019; more information is available through the Center for Slavic, Eurasian and East European Studies. 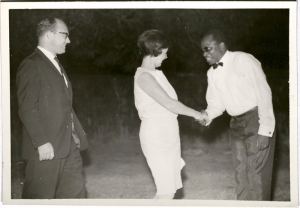 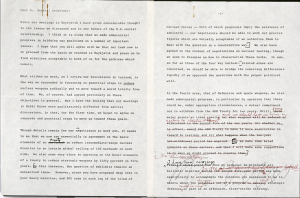 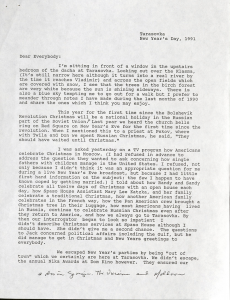 An excerpt from a 1991 “Dear Everybody” letter from Rebecca Matlock to family members. Her letters include many details of daily life and the family’s travels throughout the world. Jack and Rebecca Matlock papers, 1930s-2017, David M. Rubenstein Rare Book & Manuscript Library, Duke University 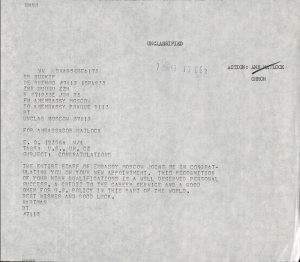